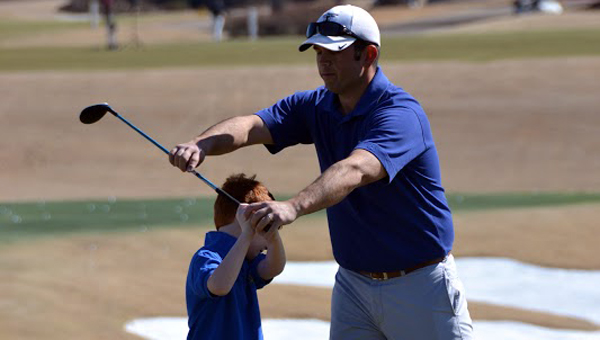 Robbie Blackwell, shown here with one of his junior golfers, has been teaching golf to youngsters ever since he was 23 years old. (Contributed)

Robbie Blackwell has had a golf club in his hand since he was five years old. He picked up the sport at a young age from his father, who taught him everything he knows about the game of golf. “I learned everything from dad, right or wrong,” said Blackwell.

However, it was not until the age of 13 that he would start to take the game seriously. “That’s when I started keeping score. Before that, I would just hit balls with my dad,” Blackwell recalled.

Blackwell continued to nurture his passion through high school while he was a member of the golf team. In fact, during his junior year they became one of only eight teams to advance to the state tournament. Now at 31, Blackwell is a full-time golf instructor who teaches a lot of junior golfers. “I just wanted to give kids at a young age a chance to learn golf as a life-long sport. Hopefully some will play competitively or at least as a hobby,” he said.

Blackwell began teaching golfers of all ages when he was 23 and said that at first he was concerned about the idea of teaching children because he believed he lacked the patience for it. After one day though, he was sure he made the right decision. “The smile on my first client’s face when he made a good shot was worth it. It’s so enjoyable being able to teach and make a difference in my profession,” said Blackwell.

For the last three years, most of Blackwell’s young clientele come from several of the Shelby County after-school care programs that offer golf as an enrichment activity. Among his weekly stops are Oak Mountain, Helena, and Mt Laurel. Even with most of his time dedicated to teaching, Blackwell still attempts to play for fun. “I try to play at least once a week. I’m lucky if I get to play once a week,” he said.

The Shelby County Lady Wildcats softball team will enter the South Central Regional with a 17-8 record and a class... read more