Pelham falls to Fort Payne in 6A semis 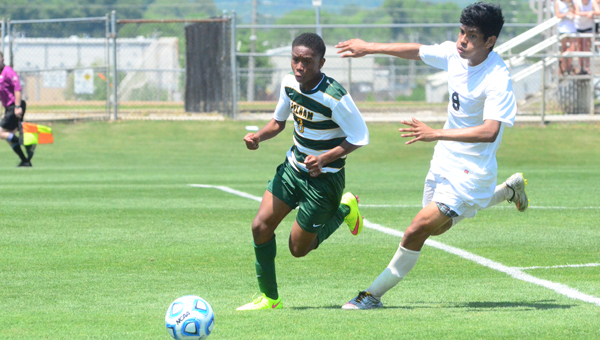 William Hilliard tries to fend off Gustavo Contrera of Ft. Payne in the Panthers May 8 6A state semifinal game. Pelham fell to Ft. Payne 1-0 and ended its season with a 16-8-3 record. (Reporter Photo / Baker Ellis)

HUNTSVILLE – After a postseason filled with everything from overtime wins to blowouts, the Pelham Panthers found themselves in Huntsville on May 8 to take on the top-ranked 6A team in the Ft. Payne Wildcats in the Final Four. The Panthers came into the game as No. 2 in 6A to set up the marquee 6A semifinal matchup between the two top-ranked teams in the state.

From the start of the first half, Ft. Payne controlled possession. Virtually the entire first 20 minutes were played in Pelham’s defensive half of the field. The Panthers defense bent early, but did not break and held off a number of Wildcat opportunities. Ft. Payne eventually broke through, when Evan McPherson caught Andrue Ham, the Pelham keeper, flat-footed with a header into the side netting with 21 minutes remaining in the first half to take a 1-0 lead.

With 11 minutes left in the first half the Panthers put together a neat sequence of passes when Amilcar Canas Aguilar found Jose Jiminez Lopez on the far side of the field. Jiminez Lopez turned and played an excellent ball around a Ft. Payne defender to a streaking Irvin Rodriguez Benitez, but the ball was sent in with just slightly too much pace, and the Ft. Payne keeper gobbled it up. The Wildcats took the 1-0 lead into the break.

“We knew going in they had a very attacking mindset,” Pelham head coach Patrick McDonald said after the game. “They have some outstanding players that have had great years. We had some really good opportunities and we just weren’t able to put one in. I felt like in the second half we calmed down, and the kids, even though we were a little flat in the beginning, they rose to the occasion in the second half.”

Pelham ended its season with a 16-8-3 record and a berth in the 6A Final Four.

Westminster School at Oak Mountain on to finals

By BAKER ELLIS / Sports Editor HUNTSVILLE – The first half was tense and scoreless, but the top-ranked Westminster School... read more