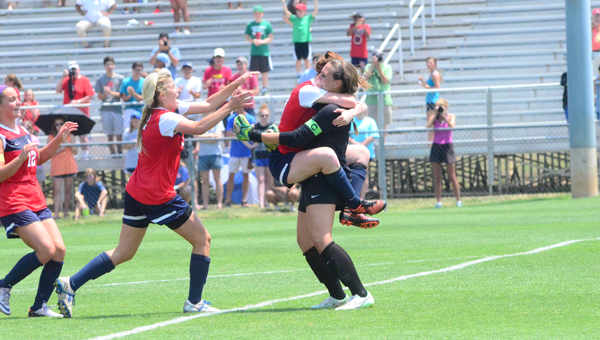 Katie Denny is mobbed by her teammates after blocking three of four penalty kicks in the 7A state finals on May 9 as the Lady Eagles from Oak Mountain wrapped up their second straight state championship. (Reporter Photo / Baker Ellis)

HUNTSVILLE – Meet the new boss, same as the old boss.

In the first year under head Coach David DiPiazza, the Lady Eagles of Oak Mountain did what they have done so well in the past, win. On May 9, Oak Mountain wrapped up yet another state title, its third in four seasons, against No. 3 Auburn.

The two teams had met once before, on March 17, which resulted in a 2-0 victory for Oak Mountain. This game was destined to be just slightly more dramatic.

The drama took a while to develop, however, and in the first half of the finals, the Lady Eagles looked a little sluggish. Repeated deep, solo runs down both sidelines by Alexandra Dunn and Julianna Jackson were the main source of offense in the first half in an otherwise stagnant 40 minutes of soccer.

“It’s hot,” Dipiazza said after the game. “I tell the girls not to make excuses and let me make them, but I think that definitely played a role in it.”

In the second half, Oak Mountain came out on another level. Multiple early chances bent the Auburn back line, and in the 54th minute Julia Buckner found Julia Pack in the Auburn 18-yard box, and Pack punched one past the Auburn keeper to give the Lady Eagles a 1-0 lead.

The lead was incredibly short lived, however, as Abby Meadows of Auburn scored just 21 seconds after Pack, before Oak Mountain had truly calmed down from it’s goal, to bring the game back to even at 1-1.

The 1-1 score held through the end of regulation, and continued to hold through two five-minute golden goal periods to send the first 7A girls state championship into penalty kicks.

Oak Mountain had been in this situation before, a week ago to the day the Lady Eagles went 13 round of penalty kicks with Vestavia Hills before advancing to the state semifinals. This time, however, it did not take near that long.

Katie Denny, the three-year starting keeper for Oak Mountain, just missed getting to the first penalty kick, and watched the ball slide past her outstretched hands into the left side of the net. Denny did not miss again, and blocked the next two Auburn attempts. Dunn, Pack and Nealy Martin all calmly sent their respective offers into the back of the Auburn net to give the Lady Eagles a 3-1 advantage. When Denny secured the fourth Auburn attempt, she threw up her hands in triumph and the celebration was on.

“It feels amazing,” an exhilarated Denny said after the game, tournament MVP trophy in hand. “It feels awesome that this is my third one (state title).”

The title is DiPiazza’s sixth as a head coach and 12th total.

“These seniors are amazing,” DiPiazza said. “I’m a new coach, and to have a brand new guy come in with a completely different attitude and personality than the last coach, if it wasn’t for these five seniors, I don’t know that what happened today would have happened.”

Oak Mountain finished the season with a 24-3-1 record and the 7A state title.