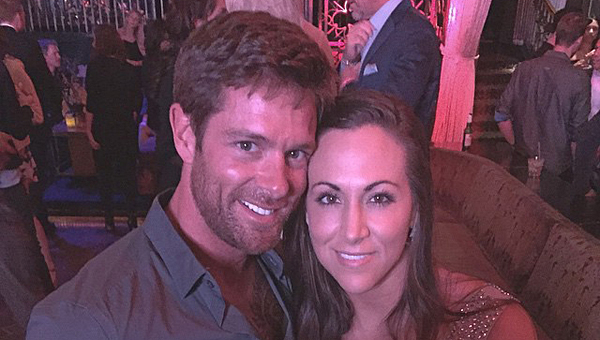 Alabaster resident Noah Galloway, left, proposed to his girlfriend, Jamie Boyd, on-air during “Dancing with the Stars” on May 11. (Contributed)

Alabaster’s Noah Galloway will return home from his time on “Dancing With the Stars” with some wedding planning to do after he surprised his girlfriend, Jamie Boyd, with an on-air proposal on May 11.

After receiving his scores from the show’s judges on May 11, Galloway surprised everyone in attendance during the backstage interview, taking a break from talking with show host Erin Andrews to pop the question.

Galloway’s proposal came after he performed a dance to David Cook’s song “Time of my Life.”

“This song, ‘The Time of my Life,’ you give that to me. And I’ve got to do this here,” Galloway said to Boyd before bending down on one knee to ask for her hand in marriage.

After Boyd said yes, the two embraced as the show’s audience and Galloway’s fellow contestants cheered the couple on.

Galloway has made it to the semifinals of the dancing competition on ABC, and will learn on May 12 if he and his dancing partner, Sharna Burgess, will proceed to the show’s final round.

In late March, Boyd, who was completing U.S. Army basic training at Ft. Leonard Wood in Missouri, surprised Galloway on-air by making an unannounced visit to the show.

Employees and supporters of the Montevallo Golf Club showed up to voice their opinions at the May 11 Montevallo City... read more