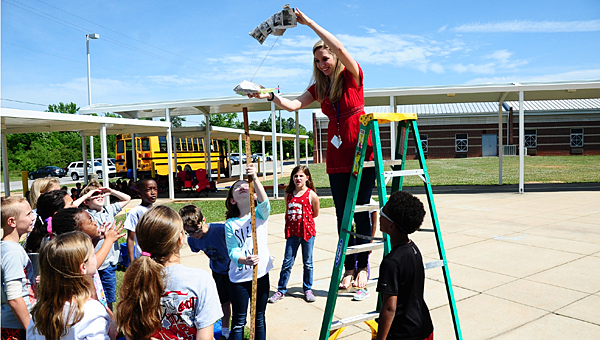 “We were in the library and we saw a picture of a spaceship falling on Mars,” Birden said. “It had a parachute, and it landed safely. So we decided to use a parachute for our egg.”

The idea worked, as the three students were the only group to have their egg survive a drop of more than 6 feet on the morning of May 14, drawing praise from their teacher, Lindsey Thigpen, and their classmates.

Each day during the week of May 11-15, Thigpen’s gifted students participated in the egg drop project, during which each group of three kids had 45 minutes to create a contraption to protect their eggs using only string, newspaper, straws and tape.

Each project was then dropped from 1 yard, 6 feet and then 12 feet to test its durability. Thigpen said the most successful designs utilized parachutes, though some other designs had been successful as well.

“One group created one that literally looked like a bird’s nest,” Thigpen said. “They interwove the straws together to protect the egg, and it was pretty successful.”

Birden said he also drew inspiration from a similar egg drop at a recent YMCA camp.

“Our counselor, she made a parachute so it landed gently, and she won,” Birden said as his team was basking in the satisfaction of victory.

Birden said he wasn’t nervous “at all” when Thigpen dropped their project from 12 feet, but his teammates had different feelings.

“Once everyone else’s broke (at 6 feet), we were pretty confident,” Morrison said before a brief pause. “And nervous.”

Thigpen said the project taught the students real-world skills, such as working together to achieve a goal under a tight deadline, thinking creatively and communicating effectively.

“They had to invent and design something that could solve a problem under a firm deadline,” Thigpen said. “These are skills they are going to have to use for the rest of their lives.”