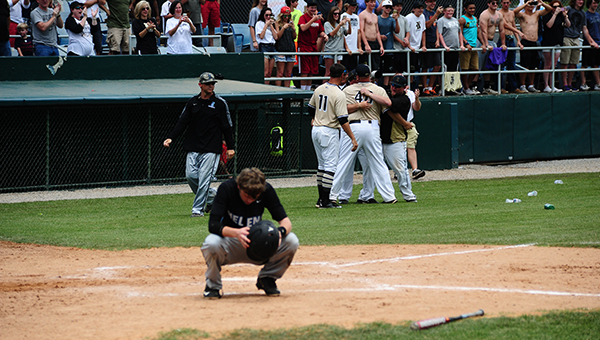 Helena’s Robbie Livley reacts after Russellville records the final out to become the AHSAA 5A State Baseball Champions. Russellville defeated Helena 3-2 and 4-1 to win the series. (Reporter Photo/Graham Brooks)

MONTGOMERY–The Helena Huskies baseball team’s motto during their magical playoff run was survive and advance. The Huskies certainly did that as they made their run through the 5A bracket where they ultimately ended up in the 5A AHSAA Baseball State Championship game in Montgomery facing off against the Russellville Tigers in a best of three series for the blue map trophy.

In the two games Helena and Russellville played, the Huskies couldn’t string together enough runs and the Tigers outplayed their opponent on the way to the series sweep and becoming the 5A state champions.

Originally, games one and two were to both be played on Friday, May 15, but a rain storm came through Montgomery that allowed only one game to be played Friday. Game two was rescheduled for Saturday, May 16 at 10 a.m. at Patterson Field and a game three would’ve been played at 1 p.m. if needed.

Helena took an early 1-0 lead in the top of the secondinning when Jake Busby doubled and then Troy Cordrey came to the plate and singled scoring Busby.

Riley Davis pitched six innings, allowed one earned run, six hits and struck out one in a losing effort.

Helena committed four errors in the game that proved to be costly in a one-run loss.

With the game tied at one going to the bottom of the fifth inning, Russellville was able to plate two runs to take a 3-1 lead.

Helena had one final chance in the top of the seventh inning and had an opportunity to tie or take the lead but squandered the opportunity.

Back to back singles to start the inning by Sam Praytor and Busby got things going. Both would then advance to second and third after a wild pitch. Praytor then scored on another wild pitch bringing the game to 3-2.

Russellville pitcher Cody Greenhill then settled down and got out of the jam recording three straight outs and giving the Tigers the game one victory.

Game two of the series was a must win for Helena if they wanted to push the series to a game three to try and capture a state championship but not enough offense was generated and solid defense and timely hitting by the Tigers gave them the victory.

A big inning for Russellville happened in the top of the second inning after the Tigers scored three runs.

Austin Bohannon recorded an RBI double and Reed Smith hit an RBI triple for the Tigers. An error by the Huskies helped give the Tigers three runs.

Russellville tacked on another run in the top of the sixth inning and Helena was never able to overcome the deficit, losing the game and the series to the Tigers to receive the runners-up trophy.

After the game, Helena head coach PJ Guy was still extremely proud of the way his team competed and accomplished this year.

“It’s tough, this is not a time to talk about what we didn’t do right, this is a time to just reflect and I’m just so proud of my kids,” said Guy. “They’ve been through a lot this year and we never wanted being a first year program to be an excuse for what we did this year or what we accomplished. I’m just so thankful and blessed that I just get to be the head coach and that they just believed in me and my staff.”

Guy also complemented the Russellville infield saying that was the “best infield we’ve played all year.”

Helena finished the year with a record of 26-19 while Russellville finished 35-6.

The Helena Middle School soccer team poses for a picture with their trophy after becoming the Shelby/Jefferson Middle School League... read more