Pelham falls to Cullman in 6A finals 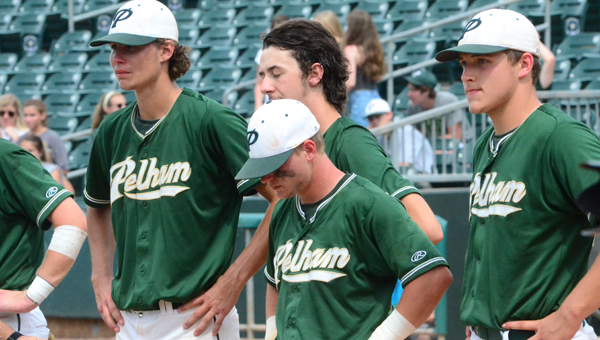 Pelham willed itself to a comeback win in game two of the 6A championship series with Cullman on May 16, but the Panthers fell in game three, finishing runners-up in the state in class 6A. (Reporter Photo / Baker Ellis)

MONTGOMERY – In the first game of the 2015 season, way back in February, the Pelham baseball Panthers beat the Cullman Bearcats by a final of 5-4. Ranked at or near the top of the 6A leaderboard all season, it was only fitting that the two squads who opened the season were the two to close it out as well.

The 6A final series was the only series in all classifications that pitted the first and second ranked teams from the last poll in the regular season against each other. Two of the top teams all year; both had sprinted through the 6A playoffs, going a combined 16-1 over the first four rounds.

In high school baseball, pitching can carry a team far, and Pelham had a stable full of dynamic arms to call on for most of the season. In the first game, played on May 15, the Panthers turned to their number one ace, Sam Finnerty. Finnerty had pitched in 14 games prior to the championship series against Cullman, and in those 14 games the most runs he had ever allowed was two, which only happened twice. On May 15, Finnerty threw six innings and surrendered five runs. Only two of those runs were earned, however, and Pelham was charged with three costly errors in the game. Down 5-1, the Panthers mounted a commendable comeback effort, scoring three runs in the top of the seventh, but fell 5-4 when Hunter Stovall flied out to right field to end game one.

Connor Radcliff, Pelham’s other howitzer, took the mound for the crucial second game of the series. It was Radcliff’s 14th appearance this season, and he threw 104 pitches over seven innings while allowing just two runs on four hits. Despite Radcliff’s effort, the Panthers still found themselves on the wrong side of the scoreboard, down 2-1.

With rally caps donned all along Pelham’s dugout, Justin Anderson hit a sacrifice fly, scoring Casey Alday from third to tie the game. After Stovall drew an intentional walk, Logan Brashier came to the plate. Brashier fouled off back-to-back pitches before taking a vicious cut at the next pitch he saw, which he missed. Cullman’s catcher mishandled the pitch, however, and Tyler White galloped across the plate from his perch on third base to win the game and force a deciding game three.

In the do-or-die third game, Pelham put the game ball in the hands of Tyler Wilburn. Wilburn had been the hero just one short week ago, pitching in the third game of the state semifinal series with Spanish Fort, leading the Panthers to a 1-0 win and giving them their state championship berth. Wilburn did not have the same success this time around, and only lasted 1.2 innings, giving up five runs on six hits to the hot Cullman bats as Pelham fell in an early hole. Alex Weeks took over and surrendered five more runs over the next 3.1 innings, and Cullman built a 10-3 lead heading into the seventh.

Finnerty tagged the first pitch of the bottom of the seventh for a home run over the left field wall, but Pelham couldn’t muster any more offense, losing the third game, and the state championship, to Cullman two games to one.

After the game, Pelham’s senior-laden roster consoled one another, and accepted their runner-up trophy with glassy eyes.

“We didn’t play as good as we should have,” an understandably emotional Sean Anderson, Pelham’s head coach, said after the final game. “(These seniors are) unbelievable. They’re like sons, all 13 of them. That’s the hardest part, is to have had these kids for six years and now I have to see them go.”

Pelham finished the season with a 33-12 record, and were the runners-up in class 6A.