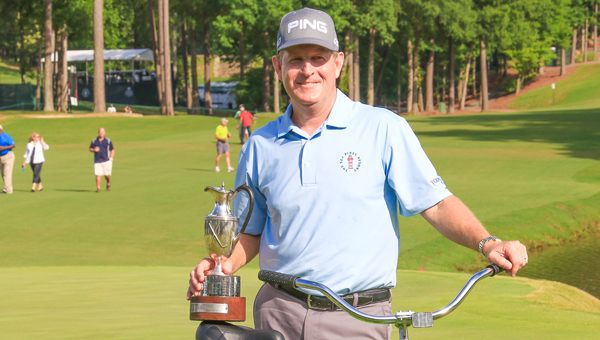 Jeff Maggert won the Regions Tradition on May 17 in a playoff against Kevin Sutherland. (Contributed / Dawn Harrison)

SHOAL CREEK – The Regions Tradition took place in Shelby County from May 13-17, and culminated with a thrilling finish. The Tradition is a major on the Champions Tour, which is the professional golf circuit for qualifying golfers over the age of 50, and has been played at Shoal Creek Golf and Country Club since 2011. This year was the last year the nomad major will take place at this location before moving on.

After his day on the course, Pearl joked that he had three birdies on the day, which was, “three more birdies than normal.”

“It’s a lot of fun, it’s kind of an escape,” Saban said before his round. “Regions does a great job with this event,” he added.

After the day of fun and relaxation, the tournament got underway. Since the Tradition moved to Shoal Creek and became the Regions Tradition, Tom Lehman has won the event twice while David Frost and Kenny Perry have each won the event once.

Heading into the last day of the tournament Kevin Sutherland and Jeff Maggert led the pack. Sutherland was 13-under-par through the first three days while Maggert was one stroke better at 14-under-par. The two battled back and forth most of the afternoon, and Maggert seemed to take control on the back nine, before missing two crucial puts on the 17th hole to give Sutherland hope. The two finished the round tied, and forced a playoff.

In the playoff, the two golfers played the 18th hole again, and Maggert won the hole, and subsequently the tournament, when Sutherland took five strokes to his four to hole the ball. Maggert was named the fourth Regions tradition champion in five years.

Josiah Middaugh, shown here at the 2014 Xterra Southeast Championship, finished second in the Men’s Pro Division on May 16,... read more