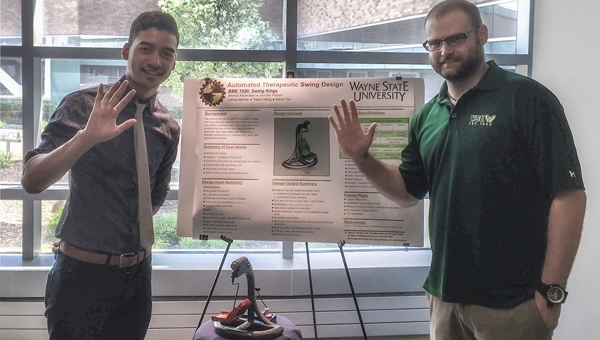 David Tes and Steven Patterson stand with the presentation board and small-scale model of their swing designed for individuals with special needs. (Contributed)

HOOVER—Ever since he can remember, Inverness resident Dustin Chandler’s 4-year-old daughter, Carly, has loved to swing. But, as she gets older, he feared this simple pleasure would be taken away from her. 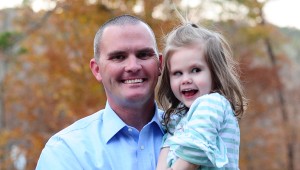 Dustin Chandler, pictured with his daughter Carly, collaborated with Wayne State engineering students to design a swing for individuals with special needs. (File)

Carly suffers from the rare neurological condition CDKL5, and her disabilities make it impossible for her to use a traditional playground swing.

“It’s not going to accommodate her much longer,” Chandler said of Carly’s current swing, which has a weight limit of 25 pounds. “The little things in life that we take for granted (such as swinging) are not always available for everybody.”

Thanks to a group of hardworking and visionary students at Wayne State University in Detroit, Carly may be able to swing for years to come.

Now known as “the swing kings,” Alhamdani, Ferrari, Harmer, Heilig and Tes started working on the project for their biomedical engineering class with Dr. Michele Grimm, Patterson joined them as an independent study.

“Our main goal of the project was to come up with a swing design that would enable users to continue using the swing as they grew older,” Alhamdani wrote.

The students consulted with Chandler and his wife, Amy, to learn what they, as parents of a child with special needs, wanted to see in a swing. Chandler noted the importance of safety, portability and sensory aspects, such as music or lights.

“Using Mr. Chandler’s requests and recommendations as well as our own engineering knowledge, we were able to come up with a list of aspects that were necessary to either include or exclude from the design,” Ferrari wrote.

Constructed using carbon steel and aluminum, the “robust frame” can support users up to 200 pounds, and is also portable “without sacrificing stability,” Harmer explained. The swing’s seat is adjustable and comfortable, and users can “click in” their own seat if desired, Patterson added. The device is controlled by a control panel and a remote, and users can hook up an iPod or MP3 player for music.

The swing kings’ design placed first at the department’s Biomedical Engineering Design Day on May 2.

“(The judges) all had good things to say about it. They loved the model, they loved the design,” Patterson said, adding the next step is “to go forward with the design” and build a full-scale prototype.

“I never imagined I’d be working with my newest friends and groupmates on something that will have a truly profound impact on the lives of others,” Harmer wrote. “This year has been truly revelatory in discovering not only something that I love to do, but also what it truly means to be an engineer.”

Chandler, too, said he looks forward to seeing a prototype of the swing.

“The Wayne State group of students really took an interest in it. They’ve been great, they deserve all the credit,” Chandler said. “It’s a neat thing. It’s hard to describe that feeling to know they’re so committed to helping people they’ve never met. It’s something special.”