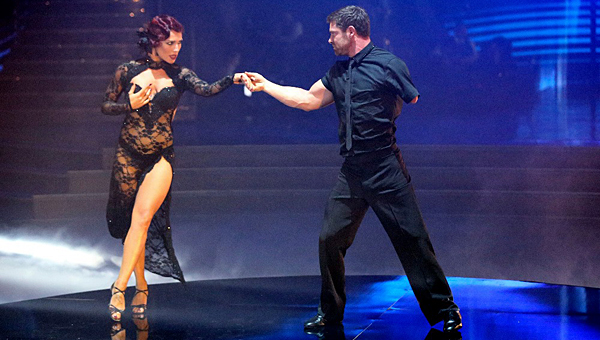 Noah Galloway and his dancing partner, Sharna Burgess, finished third on season 20 of Dancing with the Stars. (Contributed)

Alabaster resident Noah Galloway and his dancing partner, Sharna Burgess, took home bronze in the 20th season of Dancing with the Stars, judges announced during the show’s finale on May 19.

“I thought three weeks, at the most, I’d be here. I made it to third place, and I’m so happy with that,” Galloway said after the results were announced. “And it’s because of all the support of everyone out there that loved everything Sharna and I were doing.”

“It doesn’t feel like a competition because everyone I’ve met on the show has just been incredible, and they have motivated me to do more and to push myself, and that’s what I love about being on here,” Galloway said.

Before Galloway and Burgess learned their fate on the show, they performed one final time for the show’s judges, and received a score of 36 out of 40.

Rumer Willis and her teammate Val Chmerkovskiy were named champions of the show and Riker Lynch and his teammate Allison Holker placed second.

“You’ve given so much to America. Why shouldn’t America give you the mirror ball?” Judge Len Goodman told Galloway and Burgess.

“Both of you have been the heart of this competition, and you have taken the hearts of America and brought it to this ballroom,” said Julianne Hough. “You are a warrior, you are a champion, so thank you for that.”

Judge Bruno Tonioli called Galloway a “legend” and said he has “exceeded expectations week after week.”

“From a human point of view, you have been one of the most inspiring people I have had the honor to share a stage with,” Tonioli said. “You really have been a beacon of inspiration for us all.”

CHHS awards about 250 diplomas at graduation