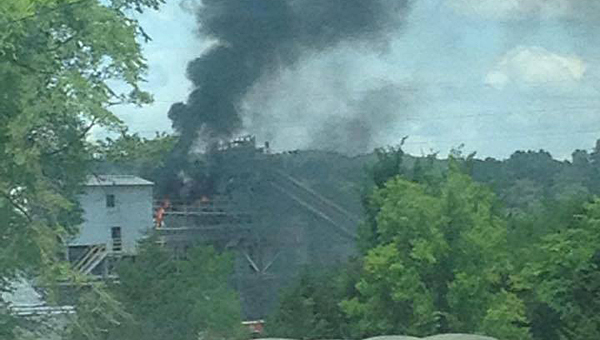 Smoke billows from a burning conveyor belt at the Lhoist lime plant in Alabaster on May 20. No injuries were reported in the blaze. (Contributed/Linda Lowden)

ALABASTER – Four fire departments and 31 firefighters responded to an Alabaster lime plant on May 20 after a conveyor belt caught fire and sent a plume of black smoke from the facility.

Golden said the blaze started when a conveyor belt caught fire about three floors off the ground. Because the fire was difficult to reach, the Alabaster Fire Department requested backup from nearby agencies.

“There was some added complexity trying to get to the fire since it was three floors off the ground,” Golden said. “So we requested some assistance.”

In addition to the Alabaster Fire Department, the Calera, Montevallo and Pelham fire departments also responded to the scene, Golden said. Thirty-one total firefighters responded to the fire.

“We got the fire under control pretty quickly. We got it suppressed and turned it back over to the facility,” Golden said, noting no firefighter or civilian injuries were reported in the incident.

“I’m not sure of the extent of the damage,” Golden said. “The fire was contained where it was. The guys did a really good job.”