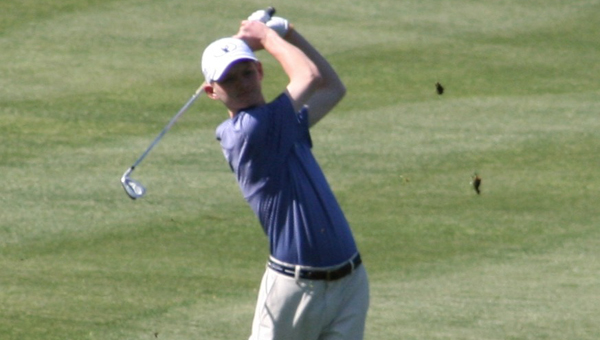 Patrick Martin shot a 36-hole total of 133 at the AHSAA 7A state golf tournament in Mobile, beating the runner-up by seven strokes. Morgan will attend Vanderbilt University in the fall on a golf scholarship. (Contributed)

Patrick Martin has been playing golf for quite a while. A golf player since the age of 9, he got a taste of winning early in his life.

“I kind of turned the page when I was nine,” Martin said on May 20. “I knew golf was the best thing for me, it was something I was the best at. I knew how to win, and for anybody winning can be addicting.”

He has spent time golfing on the Southeastern Junior Golf Tour and has won two events in the American Junior Golf Association, the 2013 NRP Bluegrass Classic and the 2014 Huntsville Junior. Since he was young, he’s known he had a knack for the game.

“He basically has gradually moved his way up,” Carter said in a May 19 phone interview. “He was our number five as a freshman. We’ve had some really good golfers in front of him. He’s just progressively gotten better every year.”

Martin, a senior, had his high school golfing career end in the most satisfying of ways. On May 12, Martin sank six birdies and 12 pars to finish his second round of the state tournament with a 6-under par 65. Per AHSAA.com, Martin’s 65 is tied for the second-lowest state tournament round in the history of the Alabama state golf tournament, just one stroke behind William Sellers of Montgomery Academy, who shot a 64 in 2012. Martin finished the two-day, 36-hole tournament with a 133, seven strokes better than second place.

As intelligent off the course as he is on it, Martin, who finished high school with a 3.99 GPA, will attend Vanderbilt in the fall on a golf scholarship. He has known Vanderbilt’s golf coach, Scott Limbaugh, for a number of years and has been committed to Vanderbilt since December of his junior year.

Like most young, talented golfers, Martin hopes to one day turn professional.

“That’s what I would like to do,” Martin said. “Time will tell.”

The Lady Eagles of Oak Mountain won their second-straight state title and held their opponents to an incredible 0.2 goals... read more