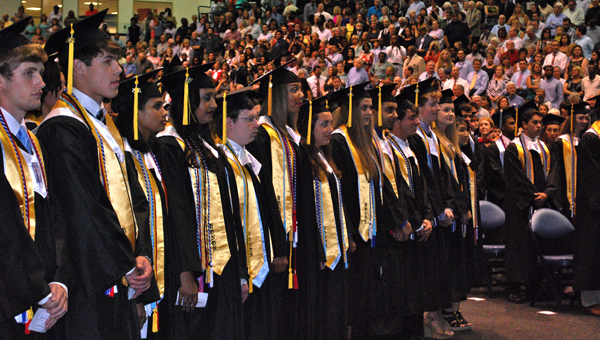 The Spain Park High School class of 2015 graduated in front of thousands of friends and family members at Samford University’s Pete Hanna Center on May 20. (Reporter Photo / Molly Davidson)

BIRMINGHAM—The 372 members of the Spain Park High School class of 2015 received diplomas in front of a packed house at Samford University’s Pete Hanna Center on May 20.

“Spain Park offered so much more than an education,” SPHS valedictorian Veena Krishnan said to her fellow students. “High school has been a very, very special four years for the class of 2015. Congratulations graduates, you made it!”

The class of 2015 graduated in front of an audience of thousands, including family, friends, members of the Hoover City Council, the Board of Education and current and former teachers.

SPHS principal Dr. Kenneth R. Jarnagin praised not only the class of 2015, but also all of the Hoover City Schools teachers and administrators who helped them along their educational journey.

“My teachers have been my role models,” Devani said. “They have taught me to be honest, hardworking and persevering in all matters.”

“I have to sincerely thank the teachers, Spain Park would not be the school it is without all of you,” Engel said. “I speak on behalf of the entire senior class… we are so blessed to go to Spain Park High School.”

Salutatorian Josh Taggart also addressed the class of 2015, encouraging his peers to “embrace the unexpected.”

Scholarships were offered to half of the graduating class, totaling nearly $17 million.

“I cannot wait to see where this journey takes us,” Engel said. “Congratulations to the class of 2015!”