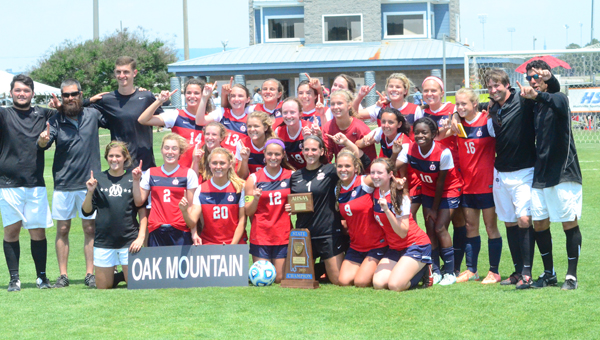 The Lady Eagles of Oak Mountain won their second-straight state title and held their opponents to an incredible 0.2 goals per game in 2015. (Reporter Photo / Baker Ellis)

Let’s take a deeper look at what exactly happened a couple weeks ago. 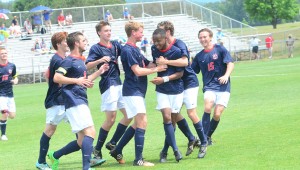 The Oak Mountain boys soccer team won the 7A state title. The Eagles had made the finals each of the previous three seasons, and finally were able to finish the job. (File)

Westminster went scorched earth in 2015. Straight apocalyptic. The Knights deployed an offense that simply no one could stop, scoring an average 4.9 goals per game, while giving up just 0.6 goals per game. The only game Westminster lost in 2015 was to 7A powerhouse Hoover, by a final of 3-2, and in that game Hoover scored two late goals to eek out a win. In the state tournament, the Knights won all four games by a combined score of 20-1, including a 3-0 win on the road against defending 1A-4A champion Indian Springs. 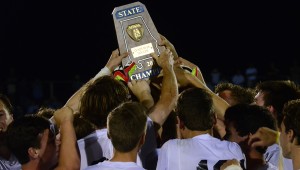 The Westminster School at Oak Mountain Knights were dominant on the soccer pitch in 2015, finishing with a 16-1-2 record and a 1A-3A state title. (File)

The Knights finished with a 16-1-2 record, with both ties coming in the first five games of the season, one to 7A Spain Park and one to 6A Homewood. Westminster is a tiny school, with a 2015 graduating class of 26, and subsequently receives little media attention. But you gotta give credit where it’s due. These boys could flat out play with anyone in the state.

It’s not a secret how good these programs have been. The Lady Eagles were the defending 6A champions in a season where they went 26-0-1 and were declared National Champions by Maxpreps.com. They literally didn’t ever lose. That’s nuts. They fell off of that meteoric platform slightly in 2015, finishing with a 24-3-1 record, but still finished the year the overall No. 1 ranked team in the state and won the inaugural 7A state title. The Lady Eagles averaged 3.2 goals per game and relinquished just 0.2. They only gave up eight goals all season. Eight. In 28 games.

The girls’ team was the rare combination of excellent skill and simply superior athleticism. In almost every game I personally watched this team play, with maybe one exception, they were more skilled but also just flat out faster than their opponent.

However, the Lady Eagles didn’t have near the tournament the Knights did. Oak Mountain had two games go into penalty kicks in the state tournament, the game against Vestavia went three rounds, and only won one game out of four by more than two goals. The play at the end of the season was indicative of a team that had been there before, and knew how to win when it mattered.

And, finally, the boys from Oak Mountain. The Oak Mountain boys soccer team has been tantalized with success the past three years, like a salivating dog jumping for a piece of Kobe beef that is just out of reach. The Eagles were very familiar with Huntsville, the location of the soccer state championships, making it to the state finals each of the last three seasons before being denied the ultimate prize on the biggest stage each time. That is not to say Oak Mountain has not had success in the past. Winners of four 6A state championships since 2005, the Eagles are a perennial powerhouse, but this particular team didn’t have a single member who had been in high school when the team won its last title.

The Eagles finished their season with a 23-4-1 record. They averaged 3.1 goals per game and only gave up 0.8 in an area and a region that had three of the top four teams in 7A all jockeying for one state berth. In their fifth consecutive finals appearance, this particular Oak Mountain bunch finally got the monkey off their backs and beat Auburn 3-0, with all three goals coming late in the second half.

A byproduct of our viral society is how quickly events fade from memory. News cycles last as long our ever-diminishing attention spans will allow. That’s good and bad. Whatever. I’m not trying to deconstruct the fabric of society here. All I’m saying is that these three teams were really, really good. And that shouldn’t be forgotten in a week. They did what only one team in each classification gets to do, win a state title. That’s a really big deal. They went a combined 63-8-4, which works out to a .86 winning percentage. Wow.

2015 was, on the soccer pitch, without a doubt, the Year of the Mountain.