Fifth graders show off talents at HIS 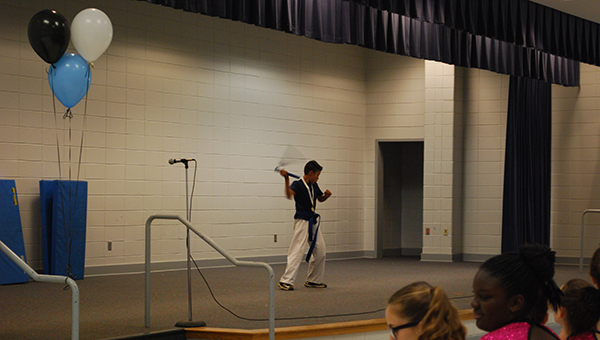 HELENA–At 1 p.m. on Wednesday, May 20, members of the Helena Intermediate School put on a talent show for their classmates, teachers, family and friends.

The cafeteria was filled with excited fifth graders waiting to see their classmates perform. Dancers were warming up, tumblers were stretching and practicing, singers were reading over the words to their songs and others were preparing for their acts.

Pink sequins, feathers, tassels and even a superman onesie could be seen around the stage in the HIS cafeteria while the performers prepared to showcase their talents.

The fifth grade class at Helena Intermediate School had 33 different performances consisting of either groups or individuals.

Malik Jackson and Cameron Yarbrough showed off their BMX bike skills by setting up ramps to showcase the different stunts that they knew.

Alec Deason played “The Star Spangled Banner” on the guitar. This got the entire crowd on their feet, singing along with their hands on their hearts.

Drew Schubert shocked the crowd when he got up to the microphone and started making different animal noises. After each vocal impression, he would stop and ask the crowd what animal they thought the noise came from. The members of the fifth grade class were more than willing to share their thoughts and the lunchroom was aroar with guesses.

Ashlyn Collett danced to “Party Never Killed Nobody” by Fergie. This song was featured in the movie Gatsby. True to the era of the movie, Collett was dressed in a dance outfit that resembled the outfits that flappers would wear.

Each of the children who participated has a unique talent all their own.

The third and fourth graders line the halls while the fifth graders walk the hall for one last time. (Contributed)... read more