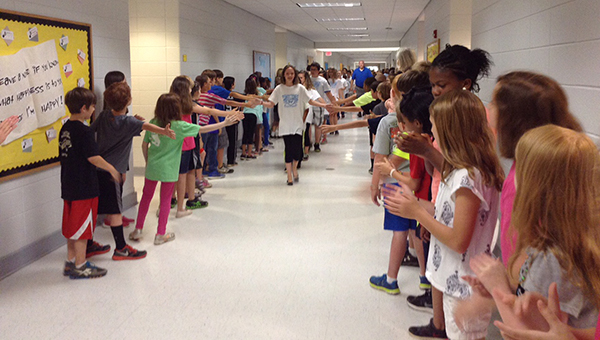 The third and fourth graders line the halls while the fifth graders walk the hall for one last time. (Contributed)

HELENA–Wednesday, May 20 started out like any other day at Helena Intermediate School. The children were all dropped off and they hurried to their classrooms.

At 8:15 a.m., things began to differ from a normal school day. The bell rang, and the third and fourth grade classes lined the hall. The 304 fifth graders from HIS started their walk to the graduation march while being applauded by the younger members of the student body.

The fifth grade class arrived in the school cafeteria clamoring with excitement. Ava Carson, SGA president, led the room in the Pledge of Allegiance.

Paiml then recognized the different clubs and organizations of the school by having the children stand when she called out their names.

Awards for perfect attendance, exemplary attendance, Elks Lodge essay contest, art and academic achievements were some of the awards given.

Every student was also given a certificate of completion and the students from each class with the highest averages in math, science and social studies were recognized.

When the class of Celia Ingram took the stage, all of the fifth grade teachers joined Ingram on the stage. Ingram is retiring this year after 20 years of teaching and the entire cafeteria stood up and applauded Ingram for her service to the school system throughout the years.

She then announced that she didn’t want her teaching assistant, Ken Ard, to forget her so she presented him with a life size picture of herself and this elicited a lot of laughter from the fifth grade class.

After each class was presented with their awards, Paiml shared a poem titled “You Can Be Whatever You Want To Be!” by Donna Levine.