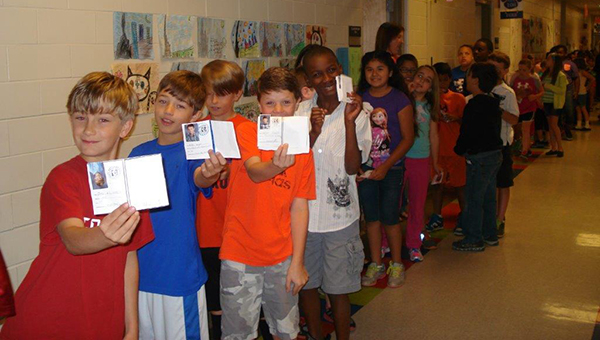 MES students hold up their passports that let them enter different countries when the school hosted the first International Food Festival. (Contributed)

MONTEVALLO–Montevallo Elementary School students were in for a surprise on Thursday, May 14, as ESL teachers, volunteers and MES Principal Dr. Allison Campbell transformed the school into a pretend airport where each student had the opportunity to explore six different countries and get a taste of their cultures.

Each country was significant because it represented a country that Montevallo students are from or where their parents or family are from.

ESL Teacher Kristen McKee described how things were set up at the school.

“We set up the school like an airport,” said McKee. “All homeroom and non-homeroom teachers were flight attendants while our assistant principal was the pilot announcing the departing flights. The art teacher made posters for all grade levels and each grade level had decorations and posters for their country.”

There was also a table set up where students had to have their passports stamped to pass customs before they were allowed to enter a country.

Once allowed in the country, students had the opportunity to sample several different delicious foods from each country that included chow fun from China, cannolis from Italy, horchata from Mexico, chai tea from Kenya, Indian donuts and more.

Many students opted to dress up like their favorite countries and many parents and Montevallo High School students helped out to make the day a success.

“One of my favorite things was seeing the children appreciate the diversity of the other students and just expanding their horizons,” said McKee.

Allison praised the teacher’s hard work and effort even if they had no experience with ESL.

“The teachers really bought in and I felt like it was and they wanted to make sure it was a special day,” said Campbell. “Their excitement made it very beneficial.”