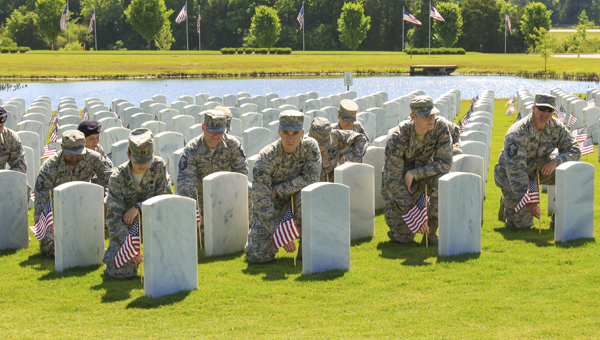 United States Air Force Airmen place flags at tombstones at the Alabama National Cemetery in Montevallo on May 23. (Special to the Reporter/Dawn Harrison)

MONTEVALLO – Alabama National Cemetery paid tribute to the nation’s heroes, those who made the ultimate sacrifice in service to our nation, during a Memorial Day ceremony today.

The National Cemetery Administration hosted ceremonies across the country with the help of local communities.

Each community added their own special touch of patriotism and “thanks” from a grateful nation during the events.

Honor guards presented the colors and rendered military salutes, bands performed patriotic music, and participants spoke of the selfless service and sacrifice of veterans, while attendees paid tribute to the more than 1 million military personnel who died to preserve America’s freedoms.

The ceremony began at 9 a.m. and lasted approximately an hour and 10 minutes.

“It is a privilege to be able to pay tribute to our nation’s heroes,” said Muir. “We are honored to have such a supportive community, one that shows such patriotism and appreciation for our heroes who lost their lives defending our nation.”

Memorial Day is a United States federal holiday observed on the last Monday of May (May 25 in 2015).

Formerly known as Decoration Day, it commemorates U.S. service members who died while in the military service.
First enacted to honor Union and Confederate soldiers following the American Civil War, it was extended after World War I to honor Americans who have died in all wars.