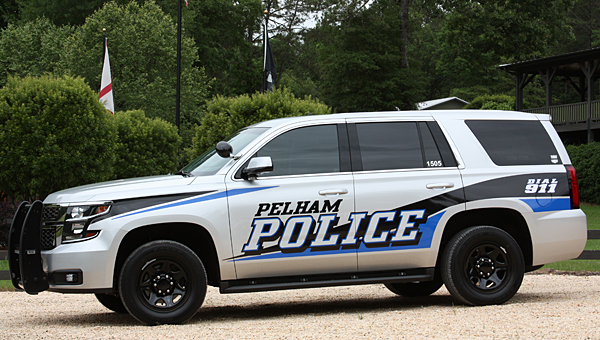 The new graphics package is slightly modified from the graphics currently on the city’s police cars. It features a silver paint job with flowing blue and black stripes and the lettering “Pelham Police” and “Dial 911” along the side.

“I think it looks a lot better,” Pelham Police Chief Larry Palmer said during a May 26 interview. “It’s a little more clean and streamlined.”

In addition to the three new Tahoes, Pelham police also recently received five new Dodge Charger sedans, which are unmarked and will be used by the department’s investigators.

Palmer said the department is gradually working to convert most of its fleet to Tahoes, but will still use Chargers for some traffic and investigator units.

Since it began using Tahoes in 2014, the department has had good experiences with the vehicles, Palmer said.

In addition to allowing more space for police equipment, the vehicles also help to combat officer fatigue, he said.

“It just gives you so many more options,” Palmer said. “The vehicles, that’s their office for eight hours a day, so comfort is a concern.

“The Tahoes are comfortable, they’re easier to get in and out of, they handle respectably and drive great,” Palmer added.

Palmer said the city is looking to get more mileage out of the Tahoes than it did with past patrol vehicles, and is hoping the Chevrolets have a higher resale value once they reach the end of their service time.

“We’ve got seven Tahoes on the road now. The real test will be when we see how long their service life is,” Palmer said, noting police vehicles rack up “hard” miles patrolling a city. “We are hoping to get more life out of them and get more when we resell it to help offset some of the cost.”

Hilltop Montessori School celebrated the end of the school year and exceeding the Annual Fund goal with a beach party... read more