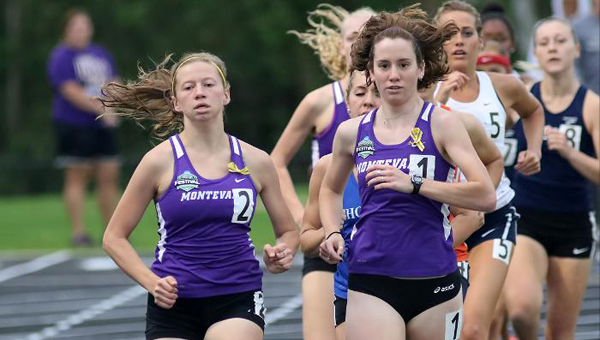 Cheyenne Thompson, left, from Chelsea, was named a first-team CoSIDA Capital One Academic All-District selection in women’s cross-country and track and field. (Contributed)

MONTEVALLO – University of Montevallo sophomore Cheyenne Thompson has been named a first-team CoSIDA Capital One Academic All-District selection in women’s cross country and track and field.

Thompson, a Chelsea native who owns a perfect 4.00 grade-point average as a Biochemistry major, earned her first Academic All-District honor on the team recognizing the NCAA Division II Southeast Region’s top student-athletes for their combined performances athletically and in the classroom.

Thompson will now advance to the CoSIDA Capital One Academic All-American Team ballot, which will recognize the top student-athletes across the nation.

“We are very excited for Cheyenne,” said Montevallo women’s cross country and track and field coach Tommy Barksdale. “This accomplishment just demonstrates what she does in the classroom and on the course and track. She is a great young lady and is well deserving of the honor.”