Twin brothers at SCHS will separate to go to college, military 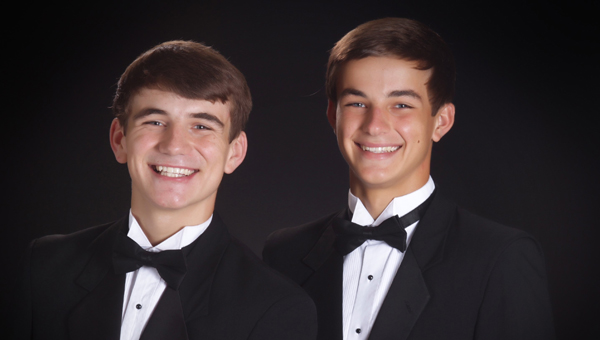 Twin brothers Tyler and Tanner Carter graduated from Shelby County High School on May 21. Tyler will attend Auburn University this fall, and Tanner will go to Marion Military Institute to prep for the Naval Academy in Annapolis, Md. (Contributed)

COLUMBIANA – Twin brothers who graduated from Shelby County High School on May 21 are preparing to take separate post-graduate paths this fall.

In several months, Tyler and Tanner Carter will leave Shelby County––and their parents, Jeff and Michelle Carter––to start college and the military, respectively.

Tyler will carry his experience from numerous theater productions at SCHS over to Auburn University, where he plans to double major in theatre and agriculture communications.

“I’m very eager to go to Auburn and see what kind of new opportunities await me,” Tyler said. “Columbiana is fantastic, but I really need to get out of my comfort zone in order to grow as a person.”

Tyler was awarded a Spirit of Auburn Scholarship and was accepted into the AU theatre program on a Robert J. Malone Theatre Scholarship.

In addition to playing the lead role of Simba in “The Lion King” at SCHS in mid-May, Tyler has been in eight productions over the last four years at the school.

“He is excited about performing at Auburn,” the twins’ mother, Michelle Carter, said of Tyler. “He plans to audition for the ‘Mic Man,’ the Auburn cheerleader that engages the crowd in cheers at ballgames. He is the ultimate Auburn fan.”

“Tyler has over 500 hours of community service, works a part-time job and is very involved in his church,” Michelle said, noting he was also a Beta Club member and graduated with an advanced diploma with several AP classes completed. “We are very proud of his accomplishments.”

Tyler has been the children’s church leader and the worship service leader for Mt. Zion Baptist Church for the last 2-and-a-half years. He volunteers each week at Columbiana Health and Rehab Nursing Home and Alpine State Prison.

Tanner will go to Marion Military Institute this fall to prepare for the Naval Academy in Annapolis, Md.

He plans to serve as an officer in the U.S. Navy and to earn a degree in systems engineering.

“I have dreamed of becoming a Naval Officer since the sixth grade,” Tanner said. “After visiting the Naval Academy in Annapolis last spring, I knew this would be my path to achieving that goal. Marion Military’s Service Academy Prep Program will help to prepare me mentally, physically and academically as I seek that appointment next year.”

Tanner was the SCHS nominee for Student of the Year and was awarded the David Phillips Memorial Scholarship and the Marion Military Service Academy Prep Scholarship.

“Tanner, with different interests than his brother, played varsity baseball (third base) and football (quarterback and free safety) since seventh grade,” Michelle said. “He has been an umpire for the local little league for the past three seasons.”

Tanner recently received his certification to become a life guard and will work at the Pelham YMCA this summer.

She said Tyler and Tanner have had the same part-time job since 10th grade.

“They are special kids,” Michelle added.

The Hoover Chamber of Commerce awarded $21,000 in scholarships to 13 students at a May 21 luncheon. (Contributed) FROM STAFF... read more