COLUMBIANA – A 41-year-old man who pleaded guilty in January to sexual abuse involving an underage victim is now being held in the Shelby County Jail without bond after he allegedly failed to follow his sex offender reporting requirements. 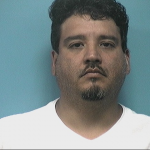 The Shelby County Sheriff’s Office arrested Rick John Vega, who previously listed an address in Pelham, on May 27 and charged him with one count of failure to follow sex offender reporting guidelines and one count of probation violation.

Reeves originally sentenced Vega to 10 years in prison, but split the sentence to two years in prison followed by five years of supervised probation. He received jail credit of two years for time served in the Shelby County Jail since his 2013 arrest, and began serving his probation period after the sentencing.

The SCSO arrested Vega on March 11, 2013, and charged him with one count of sexual abuse of a child younger than 12. Through a plea agreement, Vega’s charge was lessened to first-degree sexual abuse.

According to his indictment, Vega subjected an underage victim to sexual contact between May 20, 2012 and Sept. 28, 2012.

According to the request, Vega reported to the SCSO to register as a sex offender on Feb. 2.

“Vega wanted to register as homeless, and was advised that he would have to report back to the Sheriff’s Office every seven days,” read the probation officer’s request.

On March 10, Reeves ordered Vega be rearrested. If he is found guilty of violating his probation, his original 10-year sentence could be reinstated.

Violation of sex offender registration requirements is a Class C felony. If convicted on the charge, Vega could face up to 10 additional years in prison.

FROM STAFF REPORTS COLUMBIANA – Those interested in sharpening their gardening skills will soon have a chance to do so,... read more