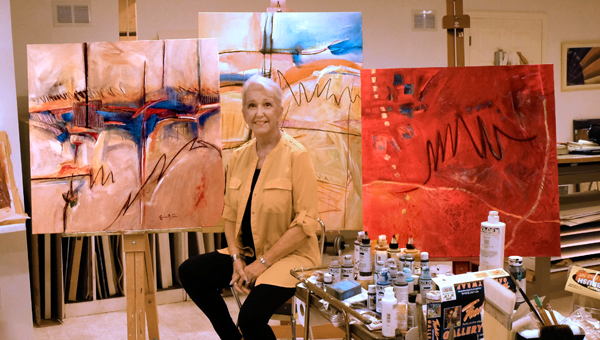 Lynne McCain in her studio with her most recent painting on the left.

“People sometimes do not realize that a great deal of thought and analysis goes into producing a non-representational painting. It is not just closing your eyes and throwing paint towards a canvas,” McCain said.

“If I desire an exact representation, then probably the camera is the way to get it, but I find that dull. I prefer to take what is there and add some imagination.”

After beginning her college studies at Auburn in engineering and earning a B.S., she met her husband, Wayne McCain. This was a time when “it was unusual to combine career and family,” and Lynne stayed home to raise their children.

Then, she found art, eventually returning to University of Montevallo to study and earn a second degree. There she especially enjoyed printmaking, in particular, collagraphy, which “tunes you in to texture overdrive.”

Her personal evolution during the past 10 years has moved to an organic expression. Still using acrylic, she reaches more for transparency and layering to create the texture. Her preferred canvas size is 40×40 or the slightly more challenging, 48×60.

“I like the paint to lead me,” McCain says. “I do like drips and runs and want them to appear totally spontaneous; an interplay of wet on wet.”

“I may not always get the exact result I envisioned, but that is irrelevant. Certainly, I want to succeed with each canvas, but in reality that doesn’t always happen,” she added. “I don’t like constraints, but I attempt to exploit the serendipitous while maintaining artistic control.”

McCain tries to spend at least two days each week painting in her home studio, which she conceived and designed 22 years ago when their home was built. Many windows bring in the seasonal light, filtered through the wooded hillside. Outside, squirrels are at play and deer freely visit.

She paints in solitude with the company of her Maltipoo, Pepper, for company.

A founding member of Arts Incorporated in Vestavia Hills in 1999, McCain still works regularly in the gallery and serves on the board.

When asked about painters whose influence she acknowledges, she mentions de Kooning and Picasso.

“I always have appreciated the Impressionists, as well,” she said.

Given the opportunity to have dinner with any artist from history, Lynne selected Wassily Kandinsky, who is credited with painting one of the first purely abstract works.

“My work is unencumbered by subject matter,” McCain says in summary. “I concentrate on line, shape, color and layering techniques such as scraping, incising and calligraphic lines to add movement, depth and playfulness to the strength of the composition.”

St. Vincent’s One Nineteen will celebrate its 10th anniversary and upcoming expansion with its annual block party on June 13.... read more