Steve Hanna was a regular fixture and friendly face at Hanna’s Garden Shop on U.S. 280 for more than 20 years. Always willing to lend a helping hand, Hanna’s people-first mentality shaped the family-owned business and made it into a community staple. 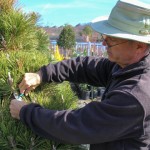 Steve Hanna, in his signature hat, was a regular and friendly presence at his family business, Hanna’s Garden Shop, on U.S. 280. (Contributed)

Hanna passed away on May 18 at age 58 after a long battle with cancer.

“He had a very strong personality,” Steve’s son, Andy Hanna, recalled. “He was definitely a people’s person… he wanted to distinguish this place where people come first.”

“Mainly, I think it was the love for people,” Andy Hanna said of his father’s decision to work at the garden shop. “He liked being face-to-face with different people every day, (and) there’s something special about nurturing plants… you’re selling something that’s alive, and that has unique challenges.”

As competition sprung up along U.S. 280, the family business maintained its success through its friendly atmosphere and knowledgeable, helpful staff.

“He hated telling people no. He always wanted to find a solution, even if you didn’t ask him for help,” Andy Hanna recalled with a laugh. “He was like a mentor… everyone knew him and respected him and wanted to do a good job for him.”

Steve Hanna continued to be a presence at Hanna’s Garden Shop, even during his second battle with cancer, wearing his signature hat and offering advice and help to customers.

“He came here even with his oxygen machine, always with a smile on his face,” Andy Hanna said. “He was careful about how he wanted his attitude to be throughout the process, not to be bitter or angry or sad.”

Steve Hanna’s legacy of care, commitment and helpful service shaped Hanna’s Garden Shop into the local success it is, and the family business will continue to operate under his business model. Andy Hanna joined the garden shop in 2011, prior to his father’s second cancer diagnosis.

“I’m going to continue to keep it going,” Andy Hanna said of the business. “Continue to put people first, that’s everything that we do. Without that, we wouldn’t be here.”

Survivors include his wife Cindy, their children, Andy Hanna (Cara), Chris Hanna (Sara), and Lauren Hanna, and his granddaughter Lucy, all of Birmingham. He is also survived by his mother Ellen Argo Hanna of Athens and his four brothers, John Hanna (Erin) of Lilburn, Georgia, David Hanna (Donna) of Snellville, Georgia, Paul Hanna (Sandy) of Dunwoody, Georgia, and Michael Hanna (Martha) of Thomasville, Georgia.

Spain Park alum Alex Close recently graduated from Liberty University and will wait to hear his name called in the... read more