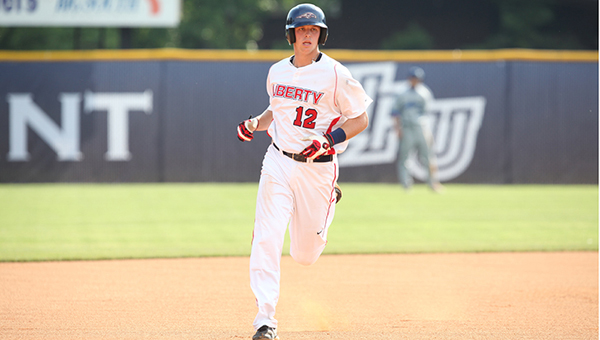 Spain Park alum Alex Close recently graduated from Liberty University and will wait to hear his name called in the MLB draft for the second consecutive year. (Contributed)

Alex Close only spent a year at Spain Park. The first baseman and pitcher came to the Jaguars as a senior in high school before moving on to Liberty University, but looks back on his time at Spain Park with fond memories.

“It was incredible,” Close said in a May 29 phone interview. “My brother is a few years younger than me, and we both made best friends we still have today even though I was just there a year.”

Close left Spain Park in 2011 and joined the baseball team at Liberty University where he has had a very impressive career. The finance major just graduated from Liberty this May, and is looking forward to the upcoming MLB draft. Last season as a junior, he was selected in the 27th round of the draft by the Kansas City Royals, but opted to remain in school for his senior season. In his last collegiate year, he had a .341 batting average, accumulated 45 RBIs and scored 40 runs entering the Big South Championship. Amongst his many accomplishments on the field as a senior, he was also named the Big South Baseball Scholar-Athlete of the Year with a 3.81 GPA.

Close came to Liberty as a pitcher. He pitched on opening day of his freshman year as a reliever, and pitched a number of games out of the bullpen as a freshman, but then did not pitch again until his senior season, playing his sophomore and junior years as a first baseman. But prior to his senior season, the Flames had a bevy of left-handed pitchers and not enough right-handers. Close, being a right-hander, volunteered to go back to the bullpen.

“When I got back to school in the fall, Coach (Jim) Toman was talking about how we had a lot of left-handed pitchers,” Close said. “I said, ‘Well, I’m a righty’ and went back to pitching.”

After being drafted as an infielder in 2014, Close is not sure what position he will be drafted for in this draft, he thinks the odds are roughly 50-50 he goes as a pitcher or as a hitter/infielder. Time will tell. For now, the Spain Park alum is trying to enjoy himself.

By BAKER ELLIS / Sports Editor The awards just keep coming for the Pelham baseball Panthers. In the midst of... read more