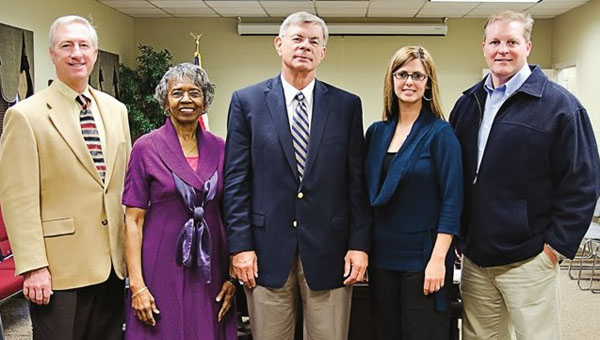 PELHAM – The Pelham Board of Education’s president and vice president will continue to serve in their respective roles for at least another year after they were re-elected to the posts during a June 2 meeting.

All Alabama school boards are required to hold officer elections during their final May regular meetings. Because the Pelham School Board did not have a meeting in late May, it held the elections during the June 2 meeting, said Superintendent Dr. Scott Coefield.

“Our May meeting got kicked to the first of June,” Coefield said.

As a result of the officer elections, Rick Rhoades will continue to serve as board president and Paul Howell will continue in his role as vice president.

Rhoades and Howell originally were elected to the roles in December 2013, and were reappointed as president and vice president, respectively, in May 2014.

School board presidents preside over all board meetings, ensure the entity follows Robert’s Rules of Order and sign all agreements approved by the board, among other responsibilities.

The vice president serves in those capacities in the absence of the board president.

During the meeting, Howell nominated Rhoades for the board president seat, and no other nominations were made. Board members Dr. Barbara Regan, Angie Hester, Howell and Brian Long voted in favor of Rhoades’ reappointment, while Rhoades abstained from voting.

Regan nominated Howell for the vice president position, and no other nominations were made. Rhoades, Regan, Long and Hester voted in favor of Howell’s reappointment, while Howell abstained from voting.

Suburbs in Shelby County fared well on this Year’s Niche.com list of Suburbs with the Best Public Schools in Alabama.... read more