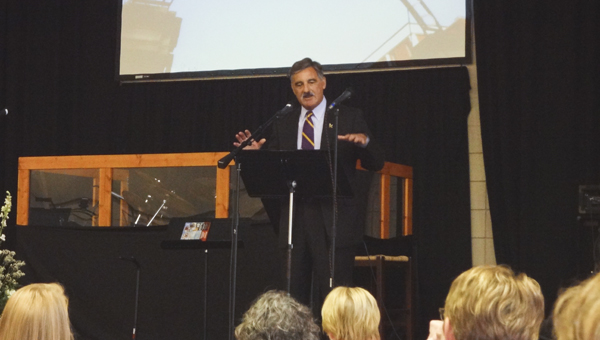 Madison Harbin from Vincent High School, Jordan McKoy from Shelby County High School and Ashton Baker from Chelsea High School each were awarded a $1,000 scholarship to apply to their college tuition.

“We thought $1,000 would make a little more of a difference for the students,” South Shelby Chamber Executive Director April Stone said, adding that the Chamber gives $500 in scholarship money to the winner of the Miss Shelby County Pageant.

Funds for the scholarships are collected through the Chamber’s annual silent auction, golf tournament and the Shelby County Shindig, Stone said.

Dr. John W. Stewart III, the University of Montevallo’s president, was the speaker at the June 4 luncheon.

Stewart described the landscape––in both a physical and financial sense––of UM when he arrived in 2010, noting improvements the college has made over the last five years in student enrollment, on-campus living, fundraising and academic offerings.

Overall enrollment has increased by 6 percent, he said.

“We scrap for every good student,” Stewart said. “There is a shrinking number of high school kids in Alabama.”

Obstacles Stewart and his staff were facing at the beginning of his term five years ago included a “great recession,” deferred maintenance, 28 percent less funding, fewer high school and college bound students and rising costs.

“It was a little daunting, but things are never as bad as they seem,” Stewart said. “We figured out we had to have a plan.”

Parts of the plan to improve UM’s presentation and “curb appeal” were creating a culture of enrollment management, philanthropy and grow enrollment; increase funding; and build revenue streams.

Stewart said he learned, “It’s a lot more fun when you’re growing than when you’re trying to figure out how not to shrink.”

Other facts and figures Stewart provided were UM has a 16:1 student-to-faculty ratio; 95 percent of faculty members have terminal degrees; the average cost of attendance is $18,310; and brands such as Barnes & Noble, Starbucks, Moe’s and Einstein Bros. Bagels have come to UM.