ALABASTER – A 26-year-old Montevallo woman is facing a felony charge of chemical endangerment of a child after police said her newborn tested positive for methamphetamine in March. 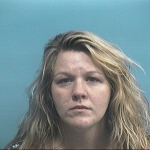 The Alabaster Police Department arrested Miranda Laree Marcus, who lists an address on Selma Road in Montevallo, on June 2 and charged her with the felony.

According to Marcus’ arrest warrant, the charge came after the suspect’s newborn girl tested positive for methamphetamine at Shelby Baptist Medical Center in Alabaster.

Marcus was released from the Shelby County Jail after posting a $15,000 bond the same day she was arrested.

She is scheduled to appear in Shelby County Circuit Court at 8:30 a.m. on July 22 for a preliminary hearing, according to court records.

Chemical Endangerment of a child is a Class C felony, and is punishable by up to 10 years in prison upon conviction.

Made with love: Hoover bakery serves up family recipes