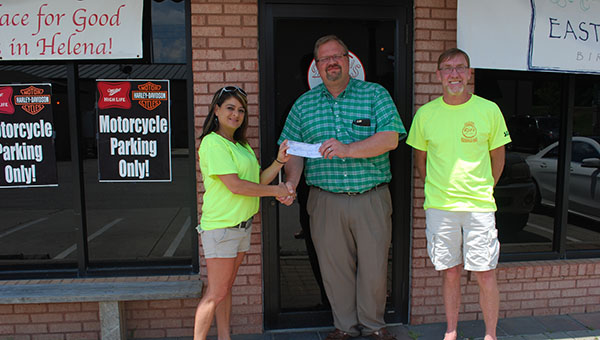 HELENA–Rio’s Bar and Grill in Helena has been known as an establishment that loves to give back to the community, while also providing good food, entertainment and atmosphere many Helena locals enjoy.

On May 15 and May 16 Rio’s had two nights of fun that resulted in $2,500 raised for the Easter Seals Pediatric Center in Pelham.

“We want to thank Rio’s from the bottom of our heart for their generosity and for considering Easter Seals,” said Higgins. “Just having the opportunity to serve others is my favorite thing about Easter Seals.”

Rio’s Bartender Anne Jacks has been with Rio’s since they opened and she said they started raising money for Easter Seals in April from Tuesday night bingo.

Jacks enjoys the fact that Rio’s gives back but she mentioned one of her favorite things is the bar and grill’s customer base.

“My favorite thing is our fantastic customer base and they’re a big reason we can give back to the community so well,” said Jacks. “The volunteers who help us out are also a big part.”

In addition to the crawfish boil, raffle tickets and silent auction items such as a Nick Saban autographed helmet and a 1985-1986 Auburn Basketball signed by the Elite Eight team were also sold.

Saturday was the most festive day that included a crawfish and shrimp boil, the silent auction and raffle items, a performance by Excalibur and also plenty of activities for both adults and children.

The fundraiser was done with the pediatric side in mind where the Easter Seals staff helps children who are struggling with speech and language delays, cognitive impairment, autism spectrum disorders and more.

“Easter Seals is a national organization and we’re a local affiliate of that,” said Higgins. “We’re a non-profit organization and we work with persons with disabilities of all ages providing different services to try to make their lives better.”

For more information on the services offered by the Birmingham Easter Seals organization visit Eastersealsbham.org

The PGA Tour Superstore donated $3,250 to both Inverness Elementary and Greystone Elementary schools to start golf programs during a... read more