Spain Park alum drafted in second round of MLB draft 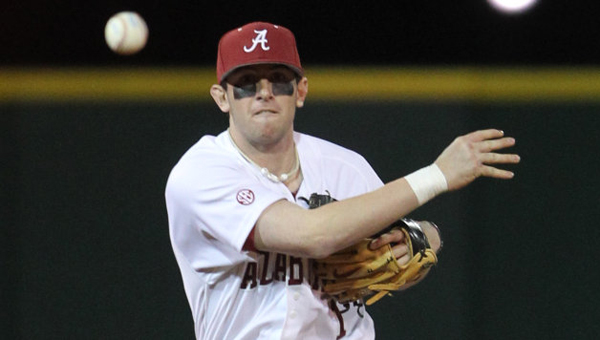 Mikey White, a Spain Park High School alumni, just finished his junior season at Alabama and was drafted in the second round of the MLB draft y the Oakland Athletics. (Contributed)

To state the obvious, Mikey White is very good at baseball. There’s some real insightful commentary for you. The Alabama junior and Spain Park High School alum has been drafted 63rd overall in the second round of the 2015 MLB draft by the Oakland Athletics, marking just the 11th time in Alabama history the Crimson Tide has had a player drafted in the first or second round of the MLB draft.

The shortstop was also drafted out of high school by the New York Mets in the 34th round of the 2012 MLB draft, but decided to forgo the opportunity and go to school. Players who are drafted out of high school but decide to go to college cannot be drafted again until after their junior season of college, or until they are at least 21 years old, per MLB.com. Since White was taken so early in this draft, the likelihood he returns to Alabama for his senior season is slim.

White was a monster in high school. His abridged high school trophy case for his senior season in 2012 includes a Mr. Baseball selection by the ASWA, a Gatorade Baseball Player of the Year by ESPN and a top-100 national player ranking in the ESPN100. He won a gold medal in the Pan American Games with the 2011 USA Baseball U18 National Team and a gold medal at the Junior Pan-American Championships with the U18 National Team as well. White batted .389 and smacked nine home runs and 37 RBIs as a senior as well as registered a slugging percentage of .712.

His collegiate list of accomplishments is too long to list here, and the full list would fit better in some sort of large spiral bound notebook. To highlight, White has been in an Alabama uniform for 184 games, and has started 184. That’s consistency Cal Ripken Jr. can appreciate. As a freshman his .287 batting average was second highest on the team. On the defensive side of the ball, he helped turn 55 double plays to rank fourth all-time in Alabama single-season history. He was also named a 2013 Louisville Slugger Freshman All-American.

As a sophomore, White was ranked No. 28 in Baseball America’s 2014 Preseason Top Sophomores list and hit .300 with 7 home runs. His junior season, and for all intents and purposes his last season with the Tide, he was the team’s overall leader in seven offensive categories including: batting average, runs scored, triples, walks, hit-by-pitch, slugging percentage and on-base percentage.

The Spain Park product has all the tools to be a big-time player at the next level, and will undoubtedly make for an exciting prospect to watch in the upcoming years.

In the clouds: One man’s journey up

Kent Stewart is a 59-year-old businessman who has climbed the tallest summits on six of the seven continents and has... read more