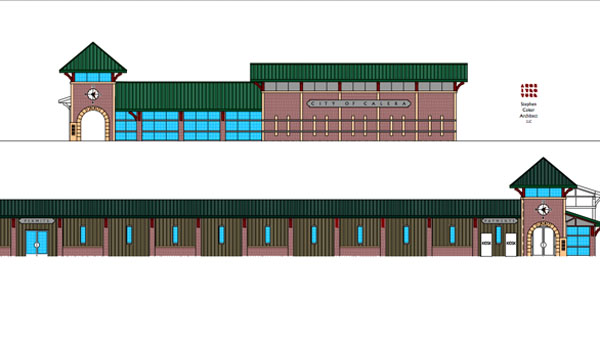 A rendering of Calera’s new city hall, created by architect Stephen Coker, that should be complete by April 2016. (Contributed)

CALERA—Work on Calera’s new city hall building began about two weeks ago out on U.S. 31, as crews began demolition at the old Bird Building Materials structure.

The need for growth and additional space prompted the decision for a new building, according to city engineer Chris Pappas. After the bid of $1.4 million was awarded to Wayne Davis Construction, a general contracting firm based out of Montevallo, at Calera’s June 1 city council meeting, work began.

Architect Stephen Coker designed the building. The plan is to modify the existing building, so parts of it are being demolished before crews lay foundation for the expansion. The 14,000-square-foot space should be complete by March or April of 2016, according to Pappas.

The building will have a new council chambers, a conference room that doubles as a safe room for the mayor and department heads during emergencies, 15 new offices, a lobby and a utility area. The entire inspections department will also move to the new city hall.

“It’s going to be a really nice facility,” Pappas said.

The project will modernize the city hall building, allowing it to keep up with new building and energy efficient lighting codes. The city will be doing all its own electrical work.

With the addition of electrical costs, the cost of new furnishings and a new parking lot, Pappas said the project will total between $2 and $2.4 million.