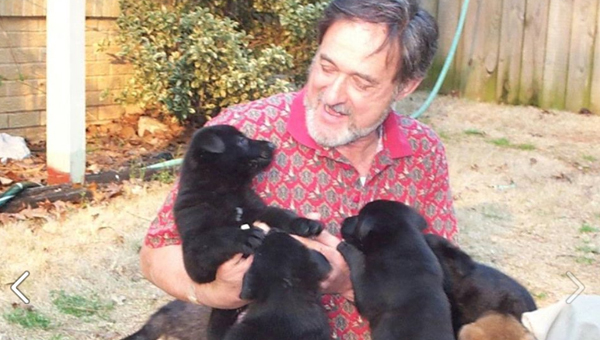 Kurt Hertrich with a number of young puppies at his Schutzhund club outside of Montevallo. (Contributed)

By JOSEPH ANTONIO/ For the Reporter

In 1965, Kurt Hertrich came to the U.S from Switzerland in hopes of becoming a pastry chef. By 1970, he had become quite successful at his craft. “At one point I delivered to 26 stores in four states,” said Hertrich. However, as business grew smaller over the years, he focused solely on wedding cakes, which he sold out of his own house until December 2013.

For the last 40 years Kurt has trained these dogs in Schutzhund, which in German literally means “protection dog.” It is a dog sport that was developed in Germany to train police dogs in obedience and protection. Courtesy of Kurt, it was brought to Birmingham during the 1970’s. The club is located just south of Montevallo.

“I helped start one of the first Schutzhund clubs in the southeast in 1977,” he shared.

Over the years, Kurt’s dogs have competed at all levels of Schutzhund trial competition, garnering him dozens of trophies and plaques. According to Kurt, a dog’s success at Schutzhund is predicated on several important aspects; “First the dog needs good nerves, no fear. He also needs a high food and prey drive. Lots of courage as well,” he said.

Kurt does not only train working dogs, he also focuses on companion dogs. “I show dogs to search and rescue people, border patrol, as well as to families who have autistic children. I train for about everything,” he shared.

However, that doesn’t mean he will sell to anyone. “I am very cautious who I sell them to. They need good homes. My motto is ‘happy dogs, happy people’,” he stated.

Even after all these years, Kurt shows no signs of slowing down. “It is my passion. I love everything about it. There isn’t just one thing (I enjoy),” he said.

When it comes to training, his protocol is quite intimate. “Training is like raising a kid. There is no difference. It takes love, discipline and consistency,” he said.