APH Radio host Gene Rowley welcomed visitors to First Friday in June during a break between the three performances that evening by Elvis impersonator Alex Swindle. 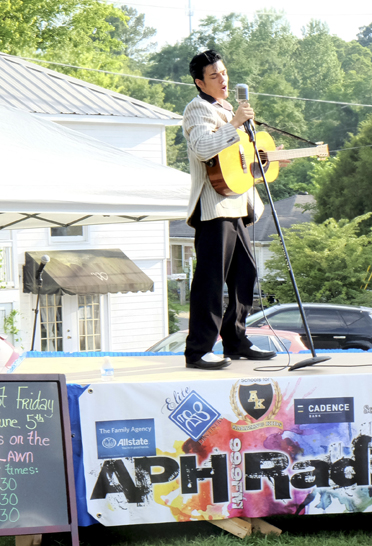 Those gathered on the lawn in front of Scozzaro Law offices were enthralled with this quite young version of Elvis.

It was noted that some groupies from Tupelo, Miss. were in the audience and that those in attendance who were visiting Helena from the greatest distance were from Delaware. That family received a recognition and T-shirt from APH.

Rowley reminded the audience that APH (Alabaster, Pelham, Helena) 99.9 radio plays a blend of musical genres offering all-hits selections from past decades, so the young or not-so-young will hear their favorites.

“Growing a voice here that has mass appeal, keeps dollars in Shelby County,” he added.

The young Alex Swindle was a part of Birmingham Children’s Theater when he decided to cultivate a few Elvis moves.

After being invited to enter a local Elvis contest, he found himself the winner, an unexpected move that started him down a new path.

Recently, Swindle won the most recent Elvis Tribute in Memphis.

Overheard from a conversation that evening was this comment: “His performance does not come across as if he is having to work hard to imitate and impersonate Elvis. He is truly a very talented young musician who can sing, dance and perform very well. His Elvis character seems quite natural.”

Also musically featured at the opening Saturday of Helena Farmer’s Market were Zach + Cheyloe. They bill themselves as a “Deep South duo with just two guitars, two loud voices, and a cajon and a washboard that are even louder.”

They have won several singer songwriter contests and are members of Nashville’s Bluebird Cafe Sunday Night Writer’s Nights family, having passed the audition in 2012.

They have “the time of their lives playing together and creating a ruckus in general.”

Performers from Sticks and Strum classes will be featured at the June 20 market.

Upcoming on July 12 at 6 p.m. in the Amphitheater will be another evening of “Jazz in the Park” featuring Willie Bradley and RAW Jazz Trio.