COLUMBIANA–A Helena man will spend two years in the Alabama Penitentiary and three years on supervised probation after pleading guilty to making a terrorist threat during a recent court hearing. 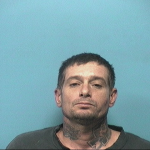 Scott Hedleston Morrow, 42, was arrested on July 24, 2014, following a domestic incident that eventually led to the guilty plea.

At the time of the arrest, SCSO Capt. Ken Burchfield said the arrest stemmed from a domestic incident, during which Morrow assaulted his girlfriend and allegedly took her against her will, leading to the terrorist threat charge and a second-degree kidnapping charge which was eventually dropped.

According to Morrow’s arrest warrant, he allegedly “threatened to shoot/kill (the victim) and her family members,” leading to the terrorist threat charge.

Morrow previously listed an address in the 2800 block of Shelby County 93 in Helena, but has since changed his address to the 2000 block of Third Avenue South in Birmingham.

Making a terrorist threat is a Class C felony. Morrow was sentenced to 10 years in prison to be split with two years to serve in the Alabama Penitentiary and three years on supervised probation. Morrow received 328 days of jail credit that will be deducted from the sentence.

As part of the sentence, Morrow must avoid initiating any contact with the victim and the victim’s family, obey all laws, avoid illegal drugs, take and pass any drug tests and testify truthfully in any judicial proceeding.

Alabaster has been spraying for mosquitoes for the past several weeks. (File) By NEAL WAGNER / Managing Editor ALABASTER –... read more