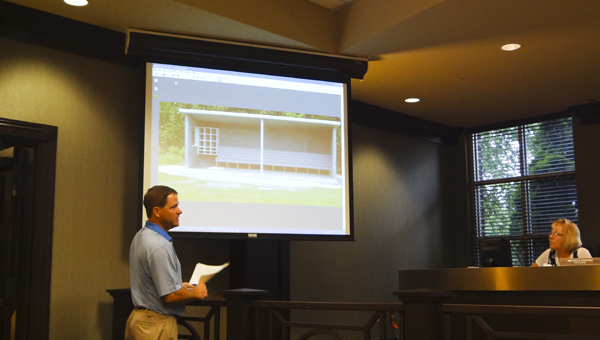 Keith Hager with Spencer Engineering in Birmingham shows the Chelsea City Council at a July 21 meeting an example of a dugout the city could use at its new sports complex off Shelby County 11. (Reporter Photo/Emily Sparacino)

CHELSEA – Another lengthy discussion about the Chelsea Sports Complex off Shelby County 11 has brought city leaders closer to advertising bids for parts of the project.

Keith Hager with Spencer Engineering in Birmingham presented plans to the Chelsea City Council on July 21 for the first phase of the project, which includes three baseball fields, a press box and concession stand and parking areas.

“The layout and general plan has not changed,” Hager said to the council. “We’re still working from the master plan you guys approved. We’ve got to start narrowing this huge project down into pieces we can handle.”

Hager showed the council pictures of different dugouts to provide real examples of designs and materials the dugouts at the sports complex could have.

“We feel like a concrete-type block is the best,” Hager said. It would be sealed and painted. “I think a metal roof looks good.”

Hager mentioned a note he made during the council’s discussion about the project at a July 7 meeting that the dugouts, which would be roughly 9 feet high, could include storage space for players’ equipment and would have an electrical receptacle.

Hager showed diagrams of various types of roof-like structures over the bleachers designed to protect spectators from foul balls and to provide shade from the sun.

Hager said the structures could cost anywhere from about $2,700 to $9,000, depending on the materials and installation.

Bleachers would be silver aluminum, about 22 feet long and five rows high, and would have handrails up the middle of each section, he said.

Nylon netting affixed to tall metal posts around the fields would provide a flexible barrier between the field and spectator areas.

Hager said the complex lighting was redesigned to include the batting cages, which could be concrete to allow players to use them even in the rain.

Hager said the 105-acre site has room for about 212 paved parking spaces and a trash receptacle.

Chelsea Fire and Rescue Lt. Don Williamson asked Hager about whether the site would have enough space for its maximum capacity of people without cars overflowing to the roadways and potentially creating problems for emergency vehicles trying to get through. He also asked if tornado shelters could be added to the plans.

“A complex this big is going to be a very popular place,” Williamson said.

Other facets of the roughly $8 million project are six competitive tennis courts, a playground area, walking trails and a 5-acre lake with a dam between 40-45 feet wide and a drilled well for irrigation.

Hager said the council needs to make decisions on the Phase 1 plans soon in order to start releasing bids at the beginning of August and stay on schedule for a spring 2016 opening date.

“I think this is a great presentation, and we’re headed in the direction we want,” Niven said. “We want to play ball out there next spring.”