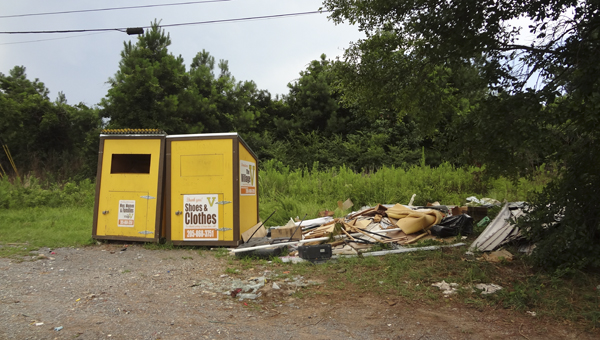 Debris piled near donation boxes off U.S. 280 and Shelby County 39 in Chelsea has raised concerns from the city’s residents lately. (Reporter Photo/Emily Sparacino)

CHELSEA – An unkempt area near a group of donation boxes off U.S. 280 at Shelby County 39 in Chelsea is raising concerns among residents.

Chelsea Citizen Observer Patrol member Robert Bush shared photos with the Chelsea City Council on July 21 of abandoned items and debris that have accumulated next to the boxes, which bear The Village and King’s Home logos.

“It’s bad for our residents,” Bush said of the area, adding he has received complaints about the area’s unsightly appearance.

Items not collected by the organizations that operate the boxes remain at the site, causing piles to form on the ground next to the boxes.

Chelsea Mayor Earl Niven said he has also received calls about the area and has been in touch with the Alabama Department of Transportation, which owns the property.

Since the property is state-owned, the city cannot authorize clean-up work for it, he said.

“We look very soon for them to make a change,” Niven said of ALDOT. “It’s a trash pile. Hopefully, something will be done.”