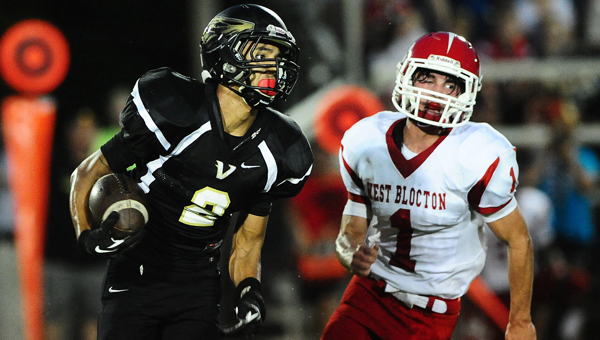 Jace Greene is gone from Vincent’s team, lost to graduation. The Yellow Jackets have the athletes to still have a good showing in 2015, and will be a sleeper in the county. (File)

The biggest problem for this team that squeezed its way into the playoffs last season is that one of the most talented players in the county, first team All-State receiver Jace Green, has graduated. For head coach Jason Hill, who is entering his third season as the head coach of the Yellow Jackets, this will be his most challenging season to date, as Vincent’s roster is full of athletes, if only Hill can utilize them correctly. Due to Vincent’s small size, just a 2A school, Hill will play a number of his top athletes both ways, making health a top priority.

No place will this dilemma prove to be truer than at the quarterback position. Jacory Roper handled the quarterbacking duties last year until he went down with an injury at which time do-it-all athlete Ar’Shon Willis replaced him. Willis will be a junior next season, and earned a first team All-State slot as a defensive athlete last season based on only six games of work. He stopped playing defense when he was called on to play quarterback. Willis is the frontrunner for the job simply based on his freakish athleticism. However, senior Matthew Swift is also looking for playing time. Swift has been a baseball player all through high school, and this is his first year on the gridiron. He has the arm strength to make the throws he needs to make, but has to continue to improve his understanding of the position.

Whether it is Willis or Swift under center, Aremee Calloway will be a huge addition in the backfield. Calloway, also just a junior, stands about 5-feet-10 inches tall and tips the scales at 225 pounds. He’s a nightmare to tackle when he wants to be, and if he does in fact decide he wants to take over games, this Yellow Jacket offense has some real potential. Hayden Gann, a senior, will split carries with Calloway as the season progresses. Gann badly hurt his ankle in the spring and is not getting a ton of touches this summer in order to help him heal. He’s going to need to re establish himself at the beginning of the season.

Vincent’s team leader in tackles, Jordan Smith, is back to help anchor the defensive line. Calloway will play linebacker, and Willis will have to play safety this season, regardless of whether or not he is under center, due to the rest of the secondary’s youth. The story on defense is the same as it is on offense for the Yellow Jackets. The athletes are there, it will just be a matter of keeping them healthy and fresh.

Cory Williams will not return as the head coach of the Vincent baseball team in 2016. Williams has accepted the... read more