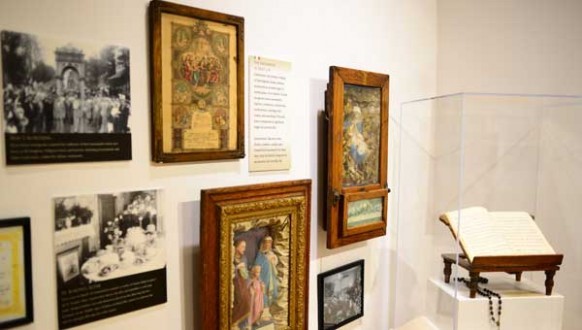 When Alabaster resident Mary Ann Tudisco’s grandmother, Maria Monte Piazza, arrived at the Port of New Orleans in 1907, she carried a single trunk containing all of her belongings from her life in Sicily.

The trunk is one of many artifacts found at the Vulcan Park and Museum’s exhibition, La Storia: Birmingham’s Italian Community, which tells the story of Italian immigrants who overcame discrimination and hardships to create vibrant communities throughout the Birmingham area.

Tudisco and her sister, Angie Giardina, donated both the trunk and a pair of rosaries for the exhibit, which will run through the beginning of September at the museum.

For Tudisco, the trunk is more than just an artifact: It is a badge of bravery.

“(The trunk) embodies the courages that they had to pack all of their belongings and their children’s belongings into a trunk,” Tudisco said. “That they would have the courages to do that, to leave everything they know to go to another country where they don’t even know the language.”

“We strive to help our community learn about history and bring together all cultures,” Berney said, noting the exhibit fulfills the museum’s mission “to preserve and promote Vulcan as the symbol for the Birmingham region, to advance knowledge and understanding of Birmingham’s history and culture, and to encourage exploration of the region.”

A large red and white Bruno’s sign hangs on one wall in the gallery—a once-ubiquitous sight for most Birmingham residents—which pays tribute to Italian-American Joseph Bruno, who built the successful chain of grocery stores with an initial investment of only $600.

“I associate with that (sign) from growing up. That family and business helped grow our city and our state,” Berney said, noting the sign is one of her favorite pieces in the exhibit.

Joseph Bruno is not the only grocer represented in the exhibit. Mary Jo Fritts, president of the Italian American Heritage Society and Inverness resident, contributed a picture of her father, Emmanuel DiChiara, standing next to a black man in a time when segregation still plagued the South. 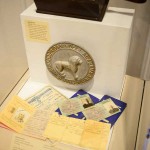 Vulcan Park and Museum is featuring the history of Birmingham’s Italian Americans in an exhibit.

DiChaira owned a number of businesses including a shoe shop and a grocery store during his life, and the picture represents an important connection between the Italian community and the black community during the time period.

There are also a number of religious artifacts in the exhibit, including marriage certificates, baptism certificates, and a bust of Father Canepa commissioned by Joe Bruno and sculpted by Carlo Roppa, which pays homage to the importance of religion among Italian American immigrants.

A shadowbox containing chalk statues of the holy family hangs on the wall of the museum, just as it hung in Fritt’s grandmother’s house when she was growing up.

“It was on the wall all the time,” Fritts remembered. “We had pictures and crucifixes all over the walls.”

Many of the Italian immigrants who come to Birmingham in the early 20th century were from Bisacquino, a small Sicilian village near Palermo. Though most entered through the Port of New Orleans, many soon traveled to Birmingham in search of better pay.

For Fritts, the exhibit tells the entire story of the many struggles and hardships her ancestors endured, as well as the vibrant community they created.

The Italian American Heritage Society assembled the religious items, papers, letters, pictures, and various other artifacts on display in the museum. Over the course of nearly six months, the group gathered artifacts at their building in Pelham. Then, curators at the Vulcan Museum then decided which items would be displayed.

The process brought alive the stories of many Italian American immigrants for those gathering the artifacts.

“To think that they did that to give us the chance to be in this wonderful country—we shared that. It was wonderful, and we were all so excited about it,” Tudisco said. “(The exhibit) is especially important for the younger generation. They don’t know what we know, and we want them to know the sacrifices their ancestors made.”