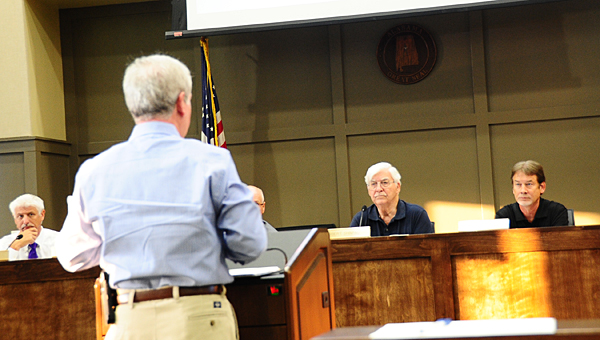 ALABASTER – The Alabaster City Council will make the final determination on rezoning a more than 300-acre tract of land for the city’s new high school after the Alabaster Planning and Zoning Board voted to recommend the rezoning during a July 28 meeting.

The board’s recommendation came little more than a month after some residents from the Kentwood and Southwind subdivisions expressed concerns about water runoff, increased traffic and excess light as a result of the new school’s construction.

The Planning and Zoning Board voted 6-0 in favor of recommending the rezoning. Board member Gary Wright, who is a project manager with Volkert and Associates, which is handling the school construction project, recused himself from voting during the meeting and sat in the audience.

As a result of the board’s recommendation, the rezoning will now move to the City Council for consideration during an upcoming meeting. The council will set a public hearing before voting on the matter.

If the matter is approved, the land will be rezoned from residential to institutional to allow for the city’s new 384,000-square-foot high school.

The Planning and Zoning Board originally was set to vote on the rezoning during its June 23 meeting, but continued the matter until July 28 after several residents expressed concerns during the June meeting. Many of the residents who voiced concerns during the June Planning and Zoning Board meeting also attended a July 13 Alabaster Board of Education meeting, where they met with the school building project’s architects and engineers.

During a pre-meeting work session, Goodwyn Mills and Cawood engineer Cole Williams said the new school project will include a 150-foot wooded buffer between the campus and surrounding neighborhoods, and “no measurable lumens” of light will reach homes surrounding the school.

Southwind resident Babs Prater, who attended the previous Planning and Zoning and School Board meetings, said many of her concerns had been addressed since the meetings.

“I personally have been satisfied with what I was told and what I have seen,” Prater said, praising Wright for meeting with her. “As far as I can see, they’ve done a fantastic job.”

Lance Gardner and his neighbor Susan Michael, residents in the Kentwood subdivision, said they still have concerns regarding water runoff from the property, and said their properties have seen water and mud damage over the past several months.

“The only issue that is still a bit of a concern for me is the water runoff. I hope as we continue forward, you will bear in mind that there are some water runoff issues,” Gardner said, noting the Alabaster City School System has conducted repairs at his home and Michael’s home as a result of water damage. “Did I have water there before this project started? Yes. Is there water there every time it rains now? Yes.”

During the pre-meeting work session, Williams said the flooding issues likely will be lessened once the construction project is completed.