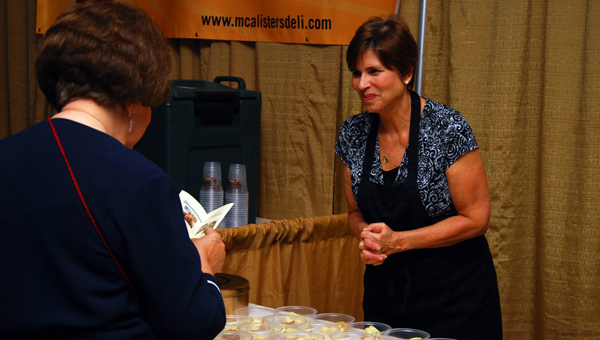 The Taste of Pelham allows caterers and restaurants to interact with new faces and create a new customer base. (Contributed)

PELHAM— Caterers, restaurateurs, food trucks and bakers are signing up for the third annual Taste of Pelham, which has officially signed with 15 vendors. With less than a month to go, Pelham City Councilman Maurice Mercer said everything is falling into place.

“It’s a great event in Pelham to showcase the local businesses,” he said. “So often, when people think of going out to have dinner, a lot of people think they have to go to Hoover or U.S. 280. The Taste of Pelham showcases quality local restaurants within five miles of Pelham.”

The third annual Taste of Pelham will take place Aug. 25 from 6-8 p.m. at the Pelham Civic Complex and Ice Arena. Tickets will be $25 in advance and $30 at the door with all the proceeds benefiting the Pelham Library Building Fund.

Last year, the event had about 30 vendors and more than 400 people in attendance. Event coordinator Barbara Roberts said they expect to have about 500 at this year’s event. Those vendors get a chance to interact with new customers and gain exposure, and Mercer said it gives guest in the market for a caterer the chance to sample “some of the best in the area.”

The indoor set up has been rearranged to make room for the anticipated increase in foot traffic, and an outdoor area will also be added to the mix. One of the biggest additions this year is food trucks. Lazy Boy BBQ is the first to sign, but Mercer said he thinks they will sign a few more.

“Food trucks are becoming a craze around the country,” Mercer said. “There are several great food trucks, and we are excited the Lazy Boy BBQ is the first food truck that has stepped up and signed up.”

Pelham has coined itself as the perfect place to play and stay, and Mercer said this is a way that Pelham is trying to live up to the “play” part of the slogan. The Taste of Pelham not only brings awareness to businesses, but also the public library in Pelham. This event serves as a fundraiser for the new library building that will feature larger meeting rooms, technology upgrades and more.

To allow vendors adequate time to prepare and to provide them with an accurate headcount, tickets will not be sold through Groupon this year as in previous years.

Vendors interested in participating can contact Debbie Parrott at 414-3672 or at Debbie.Parrott@iberiabank.com. Advance tickets are available at the Pelham Public Library and Iberia Bank in Pelham, and also online at Eventbrite.com/e/taste-of-pelham-tickets-3513301379.