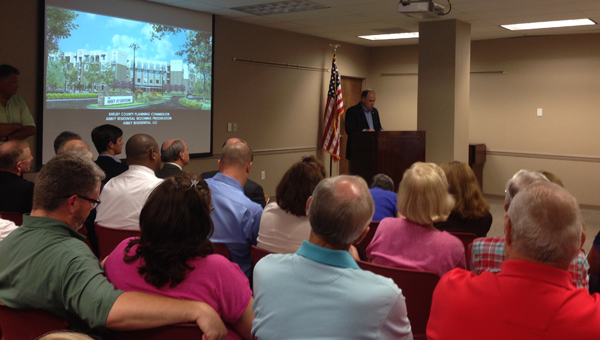 PELHAM—A hotly contested apartment complex will not be coming to the Greystone area, as the Shelby County Planning Commission denied a rezoning request for the proposed 379-unit Abbey at Greystone development during an Aug. 3 meeting.

The Planning Commission’s decision came after extensive comments from the developer, landscaper and engineers for the apartment complex and concerned area residents.

The request, submitted by Joe Ciccarello with Abbey-Greystone LLC, involved the rezoning of a 30-acre piece of land on Alabama 119, located roughly a mile north of the U.S. 280 intersection. Ciccarello requested the land be rezoned from H-Z Holding Zone District and B-2 General Business District to R-5 SD Multi-Family Residential Special District to allow for the construction of a high-density, four story apartment complex.

“You already have to time when you drive on 119,” Brook Highlands resident Cheryl Byars said. “I don’t think the infrastructure is there for (additional apartments).”

Along with adding 379 one-, two- and three-bedroom apartment units to the area, the complex was projected to generate 2,500 more vehicle trips per day along Alabama 119.

“We have so much traffic on that road, we just can’t have any more traffic on 119,” area resident Debbie Skinner said, also voicing concern about increased potential for flooding. “We’re real scared… we have a lot of water headed in our direction.”

Roughly half of the property is located in the flood plane, leaving 15 buildable acres for the proposed apartment complex, bringing the net density to 25.3 units per acre, Shepherd explained.

“To rezone for high density apartments changes the whole area,” Shepherd said. “On behalf of myself and the other two commissioners that are present (District 6 Commissioner Mike Vest and District 7 Commissioner Lindsey Allison), we firmly oppose the rezoning.”

In addition to opposition voiced by 12 area residents during the Aug. 3 meeting, Shelby County Development Services and Planning Services Senior Planner Sharman Brooks confirmed she had received 61 emails from concerned residents, which she shared with the Planning Commission.

After considering comments both for and against the rezoning, Planning Commission member Bob Land made a motion to refuse the request.

“Based on our own definition (of rezoning criteria)… my recommendation is that this proposal does not meet this criteria,” Land said.

The Planning Commission’s decision to refuse the rezoning was met with enthusiastic cheers and applause from the numerous area residents present.

The Pelham Fire Department will purchase an R ONE Series rescue boat after a decision made by the Pelham City... read more