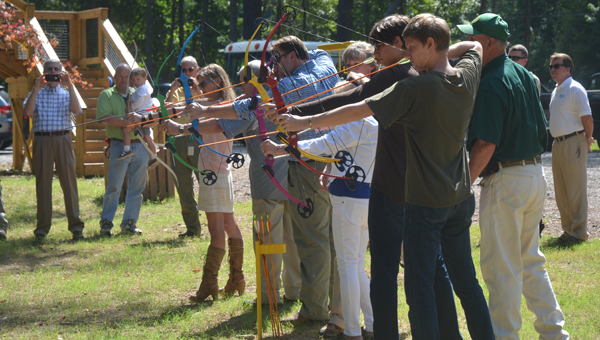 PELHAM—Partnerships were the theme of the day at Oak Mountain State Park as city and county representatives, along with several community members, attended the ribbon cutting ceremony for the long awaited archery park on Aug. 4.

The first arrows were aimed after a few words from each of the divisions who helped make the project possible. It took about two years of work from Shelby County, the city of Pelham and the Alabama Department of Conservation and Natural Resources, according to Alabama State Parks Director Greg Lien.

“This park is one of our greatest opportunities for interfacing with the public,” Lien said. “When it comes to the mission that we have and the partnering that we undertake…Oak Mountain State Park is a great place for us to deliver on all those fabulous things.”

It wasn’t just those government groups that made the project possible though. Lien said that Oak Mountain has a unique relationship with the bowhunting community who has been helping them address a growing population of white-tailed deer in the park. The bowhunting community, along with the Wildlife and Freshwater Fisheries Division and the Archery Trade Association, made the archery park a reality.

“Today we are celebrating not only that general concept (of partnership), but also the concept of archery,” he said. “Archery is not simply bowhunting. It’s the sport of archery, and this new archery park has succeeded in being developed.”

The archery park will be open year-round during daylight hours for recreational shooting, competitive tournaments and outdoor educational programming. The facility includes an eight-target adult range from 15 to 50 yards, an eight-target youth range of five to 20 yards and a four-target range of 10 to 40 yards.

Bowhunters of Alabama has already held tournaments at the site with about 270 shooters. To accommodate the population of hunters using the facility, the park also features a 12-foot shooting platform for them to practice shooting from an elevated position.

“What a beautiful facility. I know it took a lot of hard work,” said Jimmy Primos with the Archery Trade Association. “We just love partnering with Alabama. Not only do we provide a model for the archery park but we also provide funds for the archery park, and you have gone above and beyond in how you implement both the plans and the money.”

Use of the archery park is free for those under 16 or over 65, although Oak Mountain entry fees still apply. Alabamians ages 16 to 64 must have a hunting license, a Wildlife Management Area license or a Wildlife Heritage license in order to shoot. For non-residents, an annual Wildlife Management Area license or non-resident hunting license is required. Licenses are available from various local retailers or online at Outdooralabama.com.

This is the 11th community archery park in Alabama, and it is the first to open in conjunction with a state park. Other parks are located in Athens, Cullman, Dothan, Demopolis, Decatur, Foley, Heflin, Lincoln, Tuscaloosa and Ozark.