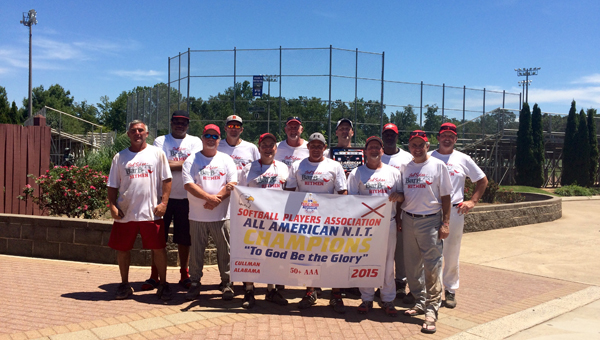 CULLMAN – The Bob Sykes Barbecue Over 50 Hitmen have not played softball together for years, and the only experience most of them have together is playing in a local rec league on Tuesday nights. However, Steve Hines knew there was talent in that rec league, and formed an All-Star team of sorts to enter the Men’s Over 50 Southern National Championship, put on by the Softball Players Association and held from Aug. 1-2.

The tournament was held in Cullman, and consisted of just five teams from Alabama, Georgia, Tennessee and Florida, and was for a chance to play in the National Championship held September 10.

“I knew we’d have a good team,” Hines said in an August 5 interview. “The cool thing is we had never played together before, but the teams we played have been playing together for years and play all over the place. They take it really seriously.”

Hines and the team he had created played five games and went 5-0, and won the championship game via a mercy rule, 15-0 decision.

“We had five people on the all-tournament team and our pitcher, James Praytor was the tournament MVP,” Hines said. “We all played in our 20s and 30s, but most of us stopped when we hit 40. But softball has such a vibrant senior scene that a lot of us picked it back up in the last few years.”

“We’re not sure we’re playing in that,” Hines said. “It’s going to be tough for us to do that quick of a turnaround. It is really an honor and flattering that the organization has reached out to us and said they want us there.”

Some of the players, like Hines and teammate Mike Godfrey, have played together for a long time, and their playing days date back to 1979. The vast majority however had not, and Hines relayed the groups’ optimism and excitement with being able to take down a number of teams that play together more often than they do.

The Montevallo athletic training staff has added Maureen Wood and Trey Hollar to their staff for the upcoming school year.... read more