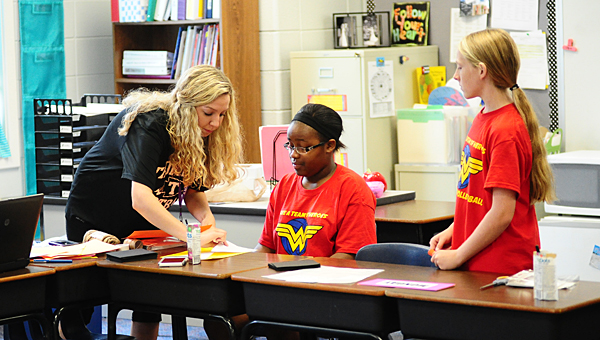 “I love doing this kind of stuff. I like doing things to help teachers,” Caffey said. “I wanted to help. They have a lot to do by themselves.”

For Caffey and her teammate on the TMS seventh-grade volleyball team, Kaylee Cannon, the task of cutting out the shapes was simple. However, for Thigpen, the students’ help was much-appreciated.

“It’s all the little things that help so much,” said Thigpen, who has spent the past several weeks moving into a new classroom near the front of the school. “I’m very appreciative for the help. Any extra hands are always appreciative.”

The TMS seventh-grade volleyball team joined their peers from the TMS eighth-grade and Thompson High School volleyball teams in helping out Alabaster and surrounding communities on Aug. 7.

While the TMS teams helped out around Alabaster, the THS team spent the day in Trussville completing a Habitat for Humanity build. Once all the projects were done, the teams were planning to host a trivia session and potluck dinner for the community in the THS cafeteria.

“We just want to let people know that we are here to give back to the community,” said seventh-grade volleyball coach Tonnie Glover. “These teachers work so hard, and it’s an honor for us to take a load off of them.”

While Caffey and Cannon helped Thigpen, several other TMS volleyball players stamped books and cut out laminated signs in the MVES library, put together teacher packets in the school’s conference room and carried boxes of books to classrooms.

“It’s really fun. We’re putting these together for every teacher at the school,” Hughes said.

Many of the volleyball players were giving back to their former elementary school teachers.

“Most of these are former students, so it’s nice to get to see them again,” said MVES Principal Rachea Simms. “We are trying to build camaraderie between the schools, and the teamwork on display today is outstanding.”

The road so far: Board of Education president reflects on Pelham City Schools

Pelham Board of Education President Rick Rhoades reflects on the accomplishments, challenges and future of Pelham City Schools. (Contributed) By... read more