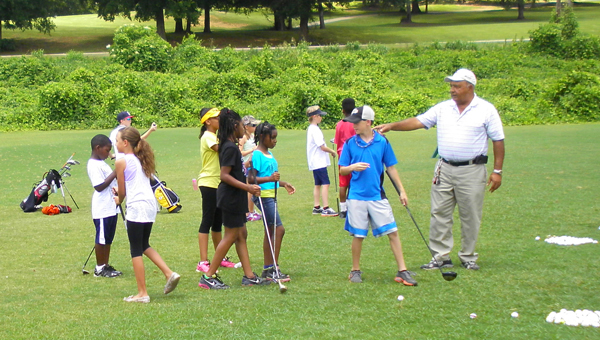 Montevallo Golf Club PGA Professional and Course Manager Ed Davis was terminated of his position after 17 years. The golf club has been a hot topic in recent weeks at the city council meetings. (File)

MONTEVALLO–The Montevallo Golf Club continues to be a recurring theme at the past several Montevallo City Council meetings and the Aug. 10 council meeting was no different.

In recent weeks, the issue with the golf course has caused some turmoil between Montevallo residents who defend the importance of the course and the Montevallo City Council when an agenda item arose stating the possibility of transitioning the course lease in October of 2016 back to the University of Montevallo.

Montevallo Mayor Hollie Cost has reiterated that there are no current plans to get rid of the golf course, but members of the public still showed up at the Aug. 10 Council Meeting after hearing about the termination of PGA Golf Professional and Course Manager Ed Davis.

Members of the community learned that Davis was terminated of his position and several voiced their displeasure with city council members on the handling of the course in recent months as well as the firing of Davis.

Cost was able to shed light on why the decision was made to let go of Davis, despite the 17 years of service he has put in with the course.

“The council was led to believe that we had backup mowers when we purchased the original mowers but in fact, we recently found out that the mowers had been sold and the sale was not properly authorized by the board at a public meeting,” said Cost.

Montevallo City Clerk Herman Lehman echoed Cost saying that the decision to terminate Davis was made because Davis chose to sell city property in an unauthorized transaction.

“An employee of the city does not have the right to sell anything of the city unless the city council or a board designated by the city votes in public session to have that item sold,” said Lehman.

Davis shared his side of what transpired and he wants it to be known that the transaction took place on June 30 and at the time, the golf board of directors was still intact and the transaction had been approved by the board and was documented.

The city of Montevallo chose to dissolve the golf board on July 13.

“What is the plan for replacing Ed,” said Montevallo resident Mitchell Spears during the public comment portion of the meeting.

An item titled “golf cart bids” was on the Aug. 10 agenda and the decision was made to gather more information and decide whether to replace the entire golf cart fleet or a few carts at a time as well as figuring out other costs.

Davis added that during his time in Montevallo he’s had tremendous support of the community, especially the last few weeks.

“I have the tremendous support of the community,” said Davis. “It’s touching to my family and me and we just want to get my name cleared. The citizens’ have been so supporting of me and that’s something I’ll take with me.”

Oak Mountain cross-country looking to turn the corner in 2015

By BAKER ELLIS / Sports Editor The Birmingham area schools are really good at running fast. In track and in... read more