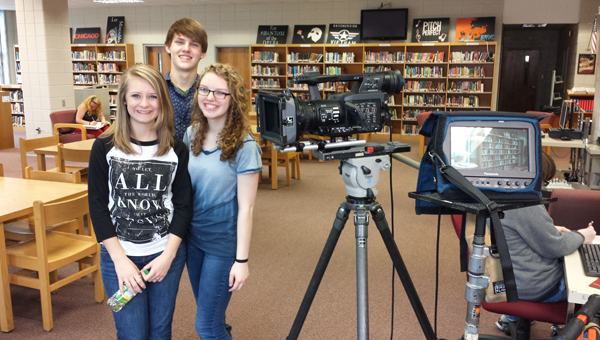 It is tough to be a teenager in today’s world.

Authority is challenged, values are skewed and pop culture has no limits.

In 2009 the National Association of Peer Program Professionals was established with its vision to establish a culture of people helping people (Peerprogramsprofessionals.org.).

Shelby County High School implemented a new program in the 2014-2015 school year where peers helped others in a program called Peer Helpers.

Moore came up with the idea to produce a video to explain the Peer Helpers vision.

Harmon is the creative services manager of Spectrum Reach and had five brothers and sisters who also graduated from SCHS.

“I so appreciated the chance to do this,” said Ricky. “I loved every bit of it, especially working with my daughter Gabby and the school I love.”

Gabby and Breanna organized the participating students in the video and made sure everyone made their call time and sign the day of the shoot.

Ryan Harmon provided technical support for his uncle Ricky during the shoot, which had the song “In the Middle” sung by Jimmy Needham as background music.

The video had its debut broadcast to the school over Wildcat TV on May 14 and is available for public viewing of the SCHS website, Shelbyed.k12.al.us/schools/schs/students.html.

“My hope is that the video inspires current and future SCHS students to help each other reach their potential; that they will lift up the fallen rather than push them down or ignore them,” said Ricky. “Being children of God we have great potential, but we can’t achieve it without our Savior and each other.”

Busy Hands Gifts and Framing and other businesses in Columbiana and throughout Shelby County will once again decorate in teal... read more