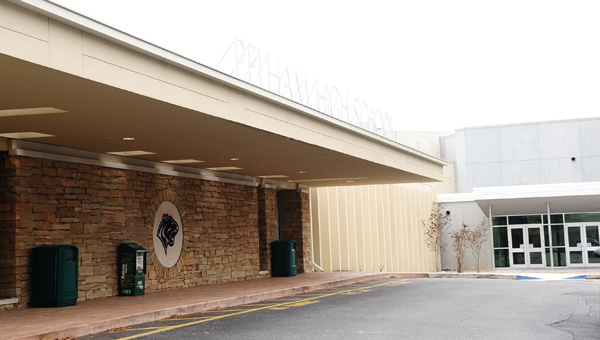 To modernize the school and keep it up-to-date, Pelham High School has undergone multiple renovation projects including the gymnasium, auditorium and science classrooms. (Contributed)

PELHAM— When Pelham High School students returned to school Aug. 12, they might have noticed some improvements to the 40-year-old building. It all started in the public areas of the building with landscaping and revamping of the gymnasium and auditorium.

“I think the board’s purpose was, where are the gathering places for the public?” said Superintendent Dr. Scott Coefield. “The gymnasiums and the auditorium were priorities.”

The old ceiling in the gym is gone. Coefield said the area is much more spacious without the low ceiling, and there are new bleachers that move in and out. The bleachers upstairs can also be pushed back to provide more space.

The system for raising and lowering the goals has been modernized, making it easier and safer for coaches. The walls have a fresh coat of paint, and the flooring is being refinished to feature the new Pelham Panther logo.

“We feel like we are taking advantage of the space,” Coefield said. “We’re creating a nicer feel with new bleachers. It will really just have a completely different look than what it had in the past.”

The floor of the gym was being finished as of Aug. 11, and Coefield said it should be completed shortly.

The PHS auditorium now features a better working air conditioning system and all new equipment relating to the rigging, lighting and AV system. Coefield said the theatre faculty met with the contractor and were able to get most of the improvements they requested.

“I think it will give us the ability to make our productions at the high school, or even for the community, much nicer,” Coefield said.

Part of the auditorium has been finished, but there are continuous renovations being done. Coefield said the projects should be complete by mid year, hopefully in time for the winter and spring productions.

Improvements don’t stop there. Coefield said the next stages are curriculum-focused, mainly on the science and academy labs. He said they are going to “gut” the two science labs and modernize them.

To accompany the newly implemented academy classes, PHS will also feature engineering and bio-medical labs. These facilities will be the size of about three normal classrooms and should be ready for use by the 2016-2017 school year.

There are future phases of renovations on the drawing board as well. One project is remodeling the administrative area to give it an open look and a student commons area, and another is to update the exterior of the school.

Budget allowing, Coefield said he hopes to get into those renovations at the high school in the next two to five years.

“I think the rational here, is let’s modernize it, let’s upgrade it so that we can utilize that facility for the next 20 to 30 years,” Coefield said. “It’s really time to make an old school into a new school the best we can.”