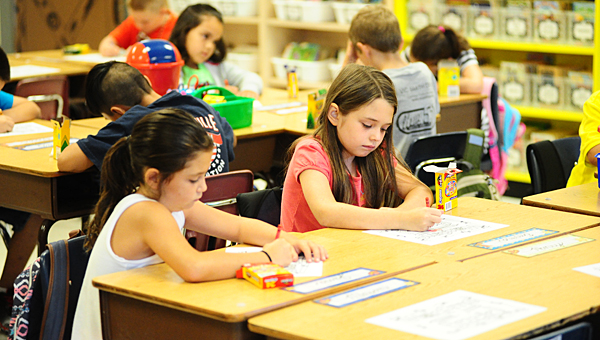 Creek View Elementary School third-graders, from left, Jana Pharo and Emma Stokesbary, get settled into their desks in Christie Wagner’s class as the first day of school starts on Aug. 13. (Reporter Photo/Neal Wagner)

ALABASTER – Creek View Elementary School kindergartener Nilah Maddox put plenty of thought into which outfit she wore to her first-ever day of school.

“Elsa!” Maddox, who was wearing a pair of blue ribbons in her hair, a Frozen shirt and a blue tutu, said when asked what she was most excited about on her inaugural day at CVES.

“It’s all about Frozen today,” her mother, Alexus, said with a laugh as she escorted her three children – Nilah, CVES second-grader King and Thompson Intermediate School student Nijah – to class on Aug. 13.

“She’s my youngest, so I’m nervous. I’m more than a little bit nervous,” she said. “But I know Creek View is a good school, so that makes me feel better.”

Fellow CVES kindergartener Katie Jane Martin had already decided which part of the day she was looking forward to the most.

Having already met her teacher, Ashley Williamson, during meet-the-teacher day, Katie Jane had only positive things to say.

“She is really nice,” Katie Jane said, noting she was “only a little bit” nervous about attending school for the first time.

Like Alexus Maddox, Sophie Martin also had mixed feelings about sending her youngest daughter off to school.

Although several thousand students – many of who rode to school with their parents – returned to schools in the Alabaster City School System on Aug. 13, the morning went smoother than expected for ACS Operations Coordinator Dr. Jeff Atkins.

“It was really good,” Atkins said during a phone interview after the first bell rang for the day. ““A lot of parents will take their kids to school the first few days so they will be comfortable. We will have a lot of kids ride the bus for the first time in the next couple of days.

“In my 17 years in Alabaster, that was the smoothest I’ve seen traffic flow on the first day,” Atkins added. “We were blessed. Everything worked like it was supposed to.”

IES kindergarteners Tucker and Cooper hug their mother goodbye on the first day of school. (For the Reporter / Dawn... read more