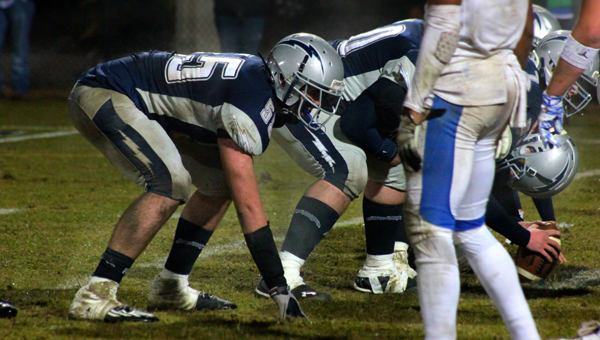 Evangel Christian’s John Will Graham will be an integral cog to both the offensive and defensive line for the Lightning in 2015. (Contributed)

Quietly, a small church school in Alabaster has created something of a dynasty. The Evangel Christian School Lightning football team is 41-7 since 2011 in the eight-man game they play, and has won the ACSC championship two out of the last three seasons. Evangel is a state-registered church school that operates under the legal and spiritual oversight of the Evangel Church, PCA, per the school’s website. The school was founded in 2004, and has essentially fielded a successful football program since then.

One of the integral pieces to this year’s squad at Evangel is senior right guard/defensive end John Will Graham. Graham has been homeschooled since the first grade, and has been playing football for Evangel since he was in the eighth grade. Graham now stands at 6-feet-6-inches and weighs in at around 240 pounds. He’d be a load to handle at any level of high school football, and will be an integral cog to taking the 2015 Lightning back to the top of the ACSC after losing their title last season.

Graham will be making a switch from nose guard, where he was an All-Conference selection last season, over to defensive end this season, where his height will be more of a weapon.

“We’ve got lots of guys who can line up at nose guard,” he said. “I think it’s to our advantage for me to play end, with my height.”

Graham thinks there are some differences in the way the eight-man game plays versus its 11-man counterpart, but overall feels they are very comparable.

“I think one thing is usually there’s a lot more space,” Graham said. “It’s a faster game. The quarterbacks are more athletic usually. There aren’t any pro-style, drop-back passers in our league. They can all run. It’s spread out, fast paced. We play the game the same way, there’s just less people so the field is more open.”

As a senior, he is starting to think about the future and what he will do after graduation. With his impressive build, football might seem like a viable option for college, but Graham doesn’t hold that opinion.

“Evangel doesn’t get a lot of attention,” Graham said. “Most of us don’t want to go play somewhere really small and commit to doing that. I can still love football but close that chapter in my life. This is probably my last hurrah.”

Something says he’ll make it a memorable one.

By BAKER ELLIS / Sports Editor For Brittany Todd, anything less than a state tournament berth is unacceptable. The second... read more