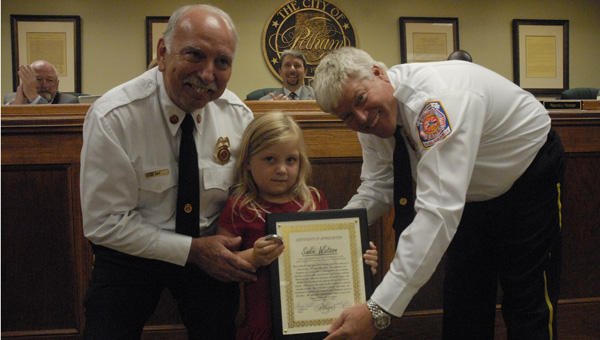 Fire Chief Danny Ray and Deputy Chief Blair Sides present Sadie Watson with a certificate of appreciation to thank her for her assistance with a fire. (Reporter photo / Jessa Pease)

PELHAM— Three local girls were recognized at the Aug. 17 Pelham City Council meeting for their assistance to the Pelham Fire Department over the summer. For their efforts, Sadie Watson, Madison Ward and Madison Kemp received certificates of appreciation and official fire department coins.

“Madison, Sadie and Madison, you make (Pelham) a great place to live,” said City Council member Beth McMillan. “The city is only as good as our neighbors are, and that’s why it’s a wonderful place.”

Fire Chief Danny Ray, Deputy Chief Blair Sides and Captain Ricky King were all at the meeting to thank the girls and present them with the awards.

Kemp, an 18-year-old Calera High School graduate, saved a young boy’s life at the July 3 Fire on the Water event. While swimming at the beach, she observed a boy coughing and going under the water.

Recognizing that he was drowning, Kemp scooped him out of the water and carried him to his parents. She saved his life, and later, the boy and his parents thanked Kemp and her grandmother.

Only seven days later, July 10, 5-year-old Watson was in her backyard when she noticed smoke coming from the storage area of her neighbor’s house. Immediately, Watson ran inside to tell her father to call 911, insisting there was a fire next door.

“Because of her quick actions, the fire department was on the scene in a few minutes and contained the fire to the storage area, preventing probable loss of four condominium units,” King said.

Ward was outside after a severe storm July 17. Ward noticed smoke coming from her neighbor’s house, so she ran to another neighbor’s door to get their attention. Once someone answered the door, they called 911.

“Gone un-noticed or ignored, the smoke seen, which was being produced from a fire in the attic, would have grown to a point where there would have been much more property damage,” King said. “The fire was stopped in a timely manner, and the family cat was saved as well.”

City Council President Rick Hayes thanked all three girls for what they did for Pelham by reporting the fires and for saving a life, and his thanks was echoed by audience, council and fire department members.

“This shows what fire prevention education does,” Ray said.

There are 16 county-versus-county match ups that will take place in 2015. Let’s take a look. (File) By BAKER ELLIS... read more